Command or Control?
Command, Training and Tactics in the British and German Armies, 1888-1918 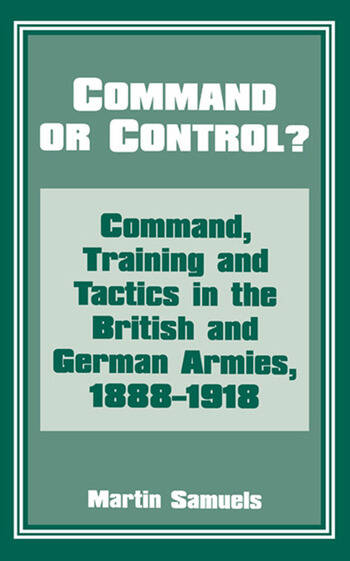 Command or Control?: Command, Training and Tactics in the British and German Armies, 1888-1918

This is a comparative study of the fighting systems of the British and German armies in The Great War. Taking issue with revisionist historians, Samuels argues that German success in battle can be explained by their superior tactical philosophy. The book provides a fascinating insight into the development of infantry tactics at a seminal point in the history of warfare.

Stand To!- "This is an interesting book, offering some challenging ideas."

Marine Corps Gazette- " Martin Samuels...is perhaps the most promising military historian to come out of a British university in a generation...He provides essential background, not only on the ways that expeditionary warfare forces can learn from other sorts of military organisations, but also about the difficulty of transplanting concepts and practices from one military culture into another"

International History Review- " Martin Samuels has written a remarkably good book in comparing the evolution of British and German ideas on warfare before and during the First World War...His book is an exhaustively researched and original look at how two armies struggled with situations that were entirely new to them...Samuels"s book is, therefore, required reading for all interested in First World War history."