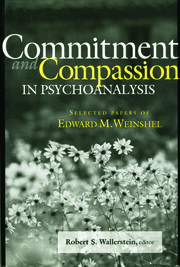 Over the course of his distinguished career, Edward Weinshel has been a moral and intellectual force in contemporary psychoanalysis and an outspoken opponent of current trends in and out of the field toward dehumanization and deindividualization.
Commitment and Compassion in Psychoanalysis, under the editorship of Robert Wallerstein, brings together 14 of Weinshel's major papers.  The six clinical papers reprinted in this collection address the kaleidoscope of common personality organizations and propensities which, in their extreme variants, motivate individuals to seek psychoanalytic assistance, covering topics that include "neurotic equivalents" of necrophilia, negation, lying, "gaslighting" (brainwashing), perceptual distortion during analysis, and inconsolability.  These clinical expositions are supplemented by eight theoretical papers in which Weinshel gives expression to the metapsychological paradigm of ego pyschology as it existed in the 70s and 80s.  Four of the papers from the early 70s cover "the ego in health and normality," the transference neurosis, and various aspects of the training analysis.  The remaining four papers, published between 1984 and 1992, chronicle Weinshel's notion of resistence as the clinical unit of the psychoanalytic process, his elucidation of specifically "psychoanalytic change" as it grows out of the psychoanalytic process, and his affirmation of modern conflict theory in the face of theoretical pluralism.

Carefully edited by Robert Wallerstein and including an introductory essay by Leonard Shengold, Commitment and Compassion in Psychoanalysis brings to contemporary debates the voice of a principled exemplar of the psychoanalytic calling.  Balancing intellectual acuity with a profoundly caring temperament, and augmenting respect for the psychoanalytic tradition with a flair for original ideas, Edward Weinshel speaks to all who wrestle daily with the burdens, challenges, and healing promise of the impossible profession.