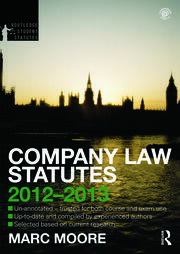 ‘Focused content, layout and price - Routledge competes and wins in relation to all of these factors’ - Craig Lind, University of Sussex, UK

Routledge Student Statutes present all the legislation students need in one easy-to-use volume. Developed in response to feedback from lecturers and students, this book offers a fully up-to-date, comprehensive, and clearly presented collection of legislation - ideal for LLB and GDL course and exam use.

Routledge Student Statutes are:
• Exam Friendly: un-annotated and conforming to exam regulations
• Tailored to fit your course: 80% of lecturers we surveyed agree that Routledge Student Statutes match their course and cover the relevant legislation
• Trustworthy: Routledge Student Statutes are compiled by subject experts, updated annually and have been developed to meet student needs through extensive market research
• Easy to use: a clear text design, comprehensive table of contents, multiple indexes and highlighted amendments to the law make these books the most student-friendly Statutes on the market    Competitively Priced: Routledge Student Statutes offer content and usability rated as good or better than our major competitor, but at a more competitive price
• Supported by a Companion Website: presenting scenario questions for interpreting Statutes, annotated web links, and multiple-choice questions, these resources are designed to help students to be confident and prepared.

Dr Marc Moore is a Lecturer in the Faculty of Laws, University College London.