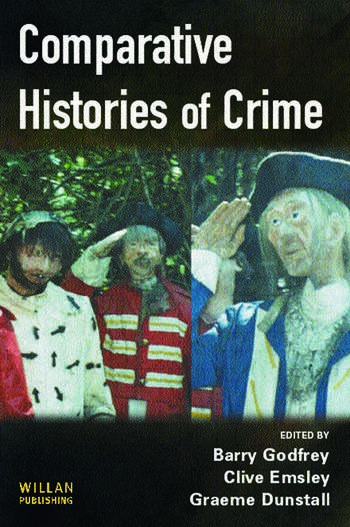 This book aims to both reflect and take forward current thinking on comparative and cross-national and cross-cultural aspects of the history of crime. Its content is wide-ranging: some chapters discuss the value of comparative approaches in aiding understanding of comparative history, and providing research directions for the future; others address substantive issues and topics that will be of interest to those with interests in both history and criminology. Overall the book aims to broaden the focus of the historical context of crime and policing to take fuller account of cross-national and cross-cultural factors.

Foreword by Martin Wiener  1. Introduction: Do you have Plane-spotters in New Zealand? Issues in Comparative Crime History at the Turn of Modernity by Barry S. Godfrey, Clive Emsley and Graeme Dunstall  2. It's a Small World After All? Reflections on Violence in Comparative Perspectives by John Carter Wood  3. Moral Panics and Violent Street Crime 1750-2000: A Comparative Perspective by Peter King  4. 'The Great Murder Mystery' or Explaining Declining Homicide Rates by Maria Kaspersson  5. Strangers, Mobilisation and the Production of Weak Ties: Railway Traffic and Violence in Nineteenth-century South West Germany by Susanne Karstedt  6. 'Inventing' the Juvenile Delinquent in Nineteenth-century Europe by Heather Shore  7. 'Scoundrels and Scallywags, and Some Honest Men ...' Memoirs and the Self-image of French and English Policemen c.1870-1939 by Paul Lawrence  8. Policing the Seaside Holiday: Blackpool and San Sebastian from the 1870s to the 1930s by John K. Walton  9. 'The Greatest Efficiency': British and American Military Law, 1866-1918 by Gerry Oram  10. The Decline and Renaissance of Shame in Modern Penal Systems by John Pratt  11. Practical and Philosophical Dilemmas in Cross-cultural Research: The Future of Comparative Crime History? by Bronwyn Morrison

Barry Godfrey is Professor of Criminology at Keele University, UK.

Clive Emsley is Professor of Criminology at the Open University, UK.