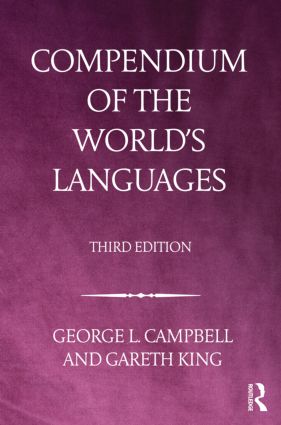 Compendium of the World's Languages

This third edition of Compendium of the World’s Languages has been thoroughly revised to provide up-to-date and accurate descriptions of a wide selection of natural language systems. All cultural and historical notes as well as statistical data have been checked, updated and in many cases expanded.

Presenting an even broader range of languages and language families, including new coverage of Australian aboriginal languages and expanded treatment of North American and African languages, this new edition offers a total of 342 entries over nearly 2000 pages.

Drawing upon a wealth of recent developments and research in language typology and broadened availability of descriptive data, this new incarnation of George Campbell’s astounding Compendium brings a much-loved survey emphatically into the twenty-first century for a new generation of readers.

Scholarly, comprehensive and highly accessible, Compendium of the World’s Languages remains the ideal reference for all interested linguists and professionals alike.

Praise for the third edition

‘This is an important reference book in Linguistics, particularly in the fields of typological and descriptive linguistics. It will also be of interest to scholars in the more than fifty individual languages covered, and especially to those who want to undertake fieldwork on these languages. All departments of Linguistics should have a copy of this book in their departmental library as well as in the general university reference library.’- Adams B. Bodomo, The University of Hong Kong

`This book will be a lifelong delight.' - Anthony Burgess, The Observer

`This is a most notable achievement: it is particularly useful for the breadth of its coverage and the consistency of its treatment…it will be an invaluable addition to academic and larger general reference collections.' - Reference Reviews

`Anyone who dips with pleasure into Katzner's Languages of the World or Comries's World's Major Languages will be able to lose themselves in Campbell for days on end.' - Language International

`This remarkable work sets a new standard for single-source linguistic profiles … Campbell's excellent survey will be an invaluable vade mecum for the linguist, as well as forming a valuable addition to larger collections.' - Library Association Record

`Compendium of the World's Languages benefits from the frequent use it makes of appropriate historical material, which gives many obscure languages a place in time and space. One might buy the book for the information it contains, but it gives much pleasure also.' - Times Literary Supplement

`Turning over the pages is like turning a kaleidoscope. The fascination is endless.' - Expresso

`It teaches an implicit lesson - not that all languages were before Babel one language, but that man is a language-constructing animal who, wherever he is, constructs in much the same way - through phonemic opposition, through counting his fingers, through noting that some things move while other things just are. To me this book will be a lifelong delight.' - Anthony Burgess, Observer

`Many readers will succumb to the temptation to read among the other netries of languages that they didn't realize existed.' - The Years Work in English Studies

George L. Campbell worked for the BBC World Service and was a polyglot linguist and translator.

Gareth King is Series Advisor for the Routledge Colloquials Series and the author of numerous books on language and linguistics.