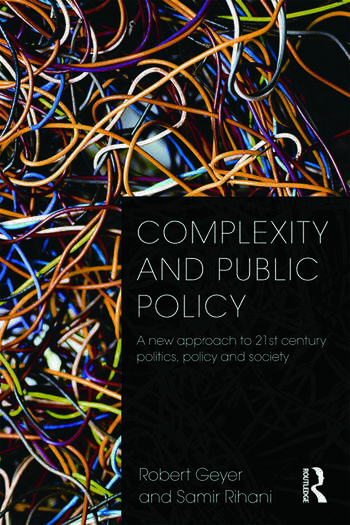 This book provides a clear, concise and readable introduction to complexity thinking, its application to the social sciences and public policy, and the relevance of some of its various tools to those fields of politics, health, the international realm, development, planning and terrorism.

The authors argue that the foundation for many of the current crises in these areas can be traced to the attempt by social scientists and policy-makers to treat these systems and processes as fundamentally orderly, predictable and controllable. By providing an overview of complex systems, a practical introduction to basic concepts and tools of these systems, and examples for understanding and managing them in real life policy situations they provide an exciting new perspective for rethinking our basic approaches to the social sciences and for understanding and managing the increasingly interdependent world of public policy.

The book is vital reading for students and scholars of the social sciences and public policy, and also policymakers and the policy actor audience.

Preface.  Introduction  1. From Orderly to Complexity Science and Public Policy  2. Concepts of Complexity  3. Tools of Complexity  4. Politics  5. Health  6. The International Realm  7. Development  8. Planning Dreams into Nightmares: The Iraq Adventure  9. Exploding the Myths of Terrorism  10. Conclusion: Towards a Complex and Humane Public Policy for the 21st Century

Robert Geyer is Professor of Politics, Complexity and Policy at the Department of Politics and International Relations at Lancaster University, UK.

Dr Samir Rihani is Research Fellow at the University of Liverpool, UK and is Non-Executive Director of the Liverpool Primary Care Trust, UK.

"Complexity and Public Policy is not only an excellent read, but it provides a thought provoking analysis of how and why so many policy initiatives – including those in public health, the war on terrorism, aid and development, the war in Iraq, and so on – have been such disappointments, disasters even. What the authors do is nothing less than challenge all of us, policymakers, scholars and citizens alike, to begin to think much differently than we ever had before. Quite simply, to stop thinking that the world unfolds in a linear way when there is all kinds of evidence to the contrary. It might sound like a truism to say that this should be required reading for all policymakers, but this time the truism happens to be true." - Mark Gibney, Belk Distinguished Professor, Department of Political Science, University of North Carolina-Asheville

"Geyer & Rihani's book provides us with a lively and engaging primer in complexity theory for political analysts and policy makers, demystifying and belying the complexity of the theory it describes. It is a timely and valuable addition to the existing literature that deserves to be widely read and engaged with." - Colin Hay, Professor of Political Analysis, University of Sheffield

"This is an eminently readable book, a primer to complexity written specifically for social scientists. It is highly recommended reading for teachers as well as students of methods, and for anybody interested not just in science but also in public policy and what it can and cannot do. Particularly important and impressive is what the authors have to say on public policies aimed at simplification and rationalization of social structures, and on the high social costs of their inevitable failure." - Wolfgang Streeck, Max Planck Institute, Cologne, Germany