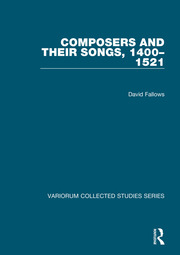 This second selection of essays by David Fallows draws the focus towards individual composers of the 'long' fifteenth century and what we can learn about their songs. In twenty-one essays on the secular works of composers from Ciconia and Oswald von Wolkenstein via Binchois, Ockeghem, Busnoys and Regis to Josquin, Henry VIII and Petrus Alamire, one repeated theme is how a consideration of the songs can help the way to a broader understanding of a composer's output. Since there are more song sources and more individual pieces now available for study, there are more handles for dating, for geographical location and for social alignment. Another theme concerns the various different ways in which particular songs have their impact on the next generations. Yet another concerns the authorshop of poems that were set to music by Binchois and Ciconia in particular. A group of essays on Josquin were parerga to the author's edition of his four-voice secular music for the New Josquin Edition (2005) and to his monograph on the composer (2009).

Contents: Preface; Ciconia's last songs and their milieu; Ciconia's influence; Two equal voices: a French song repertory with music for two more works of Oswald von Wolkenstein; Binchois and the poets; Ballades by Dufay, Grenon and Binchois: the Boorman fragment; Leonardo Giustinian and quattrocento polyphonic song; Johannes Ockeghem: the changing image, the songs and a new source; Ockeghem as a song composer: hints towards a chronology; The life of Johannes Regis, ca. 1425 to 1496; Busnoys and the early 15th century: a note on L'ardant desir and Faictes de moy; 'Trained and immersed in all musical delights': towards a new picture of Busnoys; Jean Molinet and the lost Burgundian court chansonniers of the 1470s; Walter Frye's Ave regina celorum and the Latin song style; Who composed Mille regretz?; What happened to El grillo; Influences on Josquin; Josquin and popular songs; Josquin and Il n'est plaisir; Petrucci's Canti volumes: scope and repertory; Alamire as a composer; Henry VIII as a composer; Additions and corrections; Indexes.

David Fallows is Professor of Musicology at the University of Manchester, UK

'There are so many significant (and readable) articles here that it is difficult to know which should be singled out.' Early Music Review