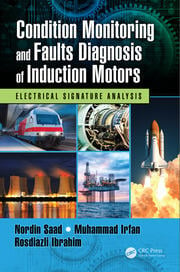 The book covers various issues related to machinery condition monitoring, signal processing and conditioning, instrumentation and measurements, faults for induction motors failures, new trends in condition monitoring, and the fault identification process using motor currents electrical signature analysis. It aims to present a new non-invasive and non-intrusive condition monitoring system, which has the capability to detect various defects in induction motor at incipient stages within an arbitrary noise conditions. The performance of the developed system has been analyzed theoretically and experimentally under various loading conditions of the motor.

4. Design and Development of a Noninvasive Condition

5. Faults Analysis and Evaluations via IPA and PVA Methods

Dr. Nordin Saad is an Associate Professor in the Electrical & Electronics Engineering Department at Universiti Teknologi PETRONAS, Malaysia. He was Head of Department of Electrical & Electronics Engineering at the university from 1998 to 2000, having joined the university in 1997. He was Cluster leader of the Industrial Automation and Control from 2005 to 2012, and subsequently Co-Cluster leader of the Power-Control and Instrumentation from 2013 to 2014, besides Focal person for Group Technology Solution PETRONAS SKG 14 (Instrument) from 2006 until 2014. He is currently leading the Center for Smart Grid Energy Research of this university. He received his BSEE from Kansas State University (USA), M.Sc. in Power Electronics from Loughborough University (UK), and Ph.D. in Control Engineering from The University of Sheffield (UK). He is a Chartered engineer registered with the Engineering Council UK, a senior member of IEEE (SMIEEE), and a member of the Institute of Measurement and Control (MInstMC) UK. His research interests include smart grids, renewable energy and energy systems, modern transportation systems, networked and industrial wireless communication, and smart fields. His current research work encompasses some of the issues in electrical drives control, power electronic converters for high power transmissions and low power applications, condition monitoring and diagnostic of machines, and instrumentation and control of facilities. He has supervised a total of six Ph.D. and four M.Sc. (by research) graduates. He has published around 120 journals, transactions, book chapters and technical papers in these areas, and he has received a number of best paper awards at international conferences for the research his teams had conducted.

Dr. Muhammad Irfan received his B.S. degree in Mechatronics & Control Engineering from the University of Engineering & Technology Lahore, Pakistan in 2009, and Masters and Ph.D. degrees in Electrical & Electronics Engineering from Universiti Teknologi PETRONAS, Malaysia, in 2013 and 2016 respectively. Currently, he is an Assistant Professor in the Electrical Engineering Department, College of Engineering, Najran University, Saudi Arabia. His main research areas are in the intelligent control, autonomous systems, wireless control, electrical drives control, and condition monitoring and fault diagnosis of electrical machines.

Dr. Rosdiazli Ibrahim received his B.Sc. degree in Electronic and Computer from Universiti Pertanian Malaysia, in 1996, M.Sc. degree in Automation & Control Engineering from University of Newcastle, UK, and Ph.D. degree in Electrical & Electronic Engineering from the University of Glasgow, UK, in 2001 and 2008 respectively. He is currently an Associate Professor at Universiti Teknologi PETRONAS, Malaysia and holding the post of Dean, Graduate Office. He was Head of Department of Electrical & Electronics Engineering at the university from 2014 to 2017. He currently teaches courses in Industrial Automation and Control Systems, and Intelligent Systems. He is a Chartered Engineer, and member of IEEE (MIEEE) and also a member of the Institute of Marine Engineering, Science & Technology (MIMarEST, UK). His main research areas are in automation & process control, condition monitoring and fault diagnosis of rotating and stationary equipment, and wireless control.