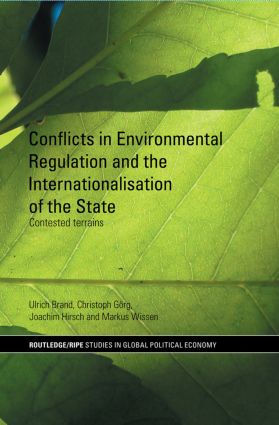 Conflicts in Environmental Regulation and the Internationalisation of the State

This book examines the global regulation of biodiversity politics through the UN UNConvention on Biological Diversity (CBD), the WTO and other international treaties. Using historical-materialist state and regulation theory, it assesses how the discourse and politics of sustainable development have contributed to the internationalisation of the state.

The authors argue that sustainable development, far from being a fixed concept, is a conceptual terrain on which different and conflicting symbolisations of and solutions responses to of the ecological crisis struggle for hegemony. Furthermore, it shows that the international multilateral environmental organisations agreements are not at all a means to counteract neoliberal globalisation but, on the contrary, form an integral part of the ongoing transformation process. Focussing on the UN Convention on Biological DiversityCBD, the FAO International Treaty on Plant Genetic Resources for Food and Agriculture and the Agreement on Trade-related Aspects of Intellectual Property Rights (TRIPS) in the World Trade Organisation, this co-authored volume addresses the following issues:

'This book represents an important contribution to the study of global environmental politics and indeed international political economy. Understanding the global politics of access to and control over genetic resources through an historical materialist approach represents an innovative and welcome development.' - Peter Newell, Professor of Development Studies, University of East Anglia, UK

‘Contested terrains is one of the most insightful works on "environmental issues" that I have seen in recent years. The contributors foreground a nuanced view of power relations among states, corporations, NGOs and others, acting in a political economy that is not state-centric, on the one hand, yet not a "global society," on the other. As a result, we gain a much clearer understanding of the interplay between discursive and material resources and the way in which the "level playing field" is only level, at best, on average. This is a book that demands to be read. Now!’ - Ronnie D. Lipschutz, Department of Politics, University of California, Santa Cruz, USA

‘A compelling and insightful book on conflicts over genetics, intellectual property rights, and the future of agriculture. A must read for anyone concerned with the erosion of genetic diversity and how it has become a flash point for power struggles between the global North and South.’ - Michael Goldman, Department of Sociology, University of Minnesota, USA. Author of Imperial Nature: The World Bank and Struggles for Social Justice in the Age of Globalization

‘This is a path-breaking study advancing the conceptualization of global governance. The authors undertake the long overdue project of adapting the insights of state theory to new phenomena of international rule-making. This allows them to go beyond state-centric approaches in International Relations and make visible the interests of social forces in global environmental regulations…The result is a thoroughly satisfying book that should be required reading in all advanced courses on international organization and global governance.’ - Elisabeth Prügl, Florida International University, USA

‘This book is a compelling re-statement of the project of regulation theory in the context of a vital complex of problematiques at the intersection of the international competition state and global political ecology.’ - Roger Keil, Faculty of Environmental Studies, York University, Canada

‘This innovative book provides important new theoretical and empirical insights into crucial issues in the critique of political ecology -- and not just political economy -- in the era of global capitalism. Based on many years of serious empirical research as well as their own original contributions to the development of state theory and political economy, Brand, Görg, Hirsch and Wissen now present a major contribution to the analysis of the economic and political regulation of nature, its associated conflicts, and the various sites and scales of struggles over the commercialization of nature. While the authors focus on biodiversity, their argument has a far broader relevance to political ecology and also marks a major breakthrough in the analysis of the nature and limits of the internationalization of the state and governance. This book is essential reading for readers from many disciplines in the natural and social sciences and provides a genuinely transdisciplinary analysis of this important and controversial topic.’ - Bob Jessop, Founding Director of the Institute of Advanced Studies, Lancaster University, UK

Introduction: Genetic Resources and the Internationalisation of the State 1. The Regulation of Nature in Post-Fordism 2. On the Value of Nature: The Convention on Biological Diversity and the Commercialisation of Genetic Resources 3. Limits to Commercialisation?: Genetic Resources in Agriculture and the Conflict over a Multilateral Exchange System 4. Politicising Intellectual Property Rights: The Conflicts around the TRIPS Agreement and the World Intellectual Property Organisation 5. The Relevance of the National and the Local: The Disputes over a Valorization Paradigm in Mexico and Chiapas 6. Contested Terrains: Towards a Neo-Poulantzian Approach to International Political Economy

Christoph Görg is a Senior Researcher at the Helmholtz Centre for Environmental Research-UFZ in Leipzig, Germany.

Joachim Hirsch is Emeritus Professor in the Department of Social Sciences, University of Frankfurt, Germany.

Markus Wissen is Assistant Professor of the Institute for Political Science at Vienna University, Austria.