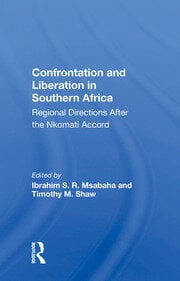 Confrontation and Liberation in Southern Africa: Regional Directions After the Nkomati Accord

The 1984 "Nkomati Accord"â€”a bilateral security agreement between South Africa and Mozambique to eliminate guerrilla threats on both sides of a common borderâ€”was a milestone in regional confrontation and cooperation. Yet, the real challenge to the white South African regime is not external; it is internal opposition to apartheid. This volume, written by leading African scholars, begins by exploring the origins of racism and nationalism in Southern Africa. The contributors discuss the spread of nationalist movements throughout the region, arguing that South Africa has attempted to resist, divert, or undermine the domino effect by capitalizing on the Nkomati Accord. The authors focus on the legal aspects of the Accord, its impact on the foreign and defense policies of the Front Line States, prospects for regional development and economic integration, and potential outcomes of the national liberation struggles in Southern Africa.