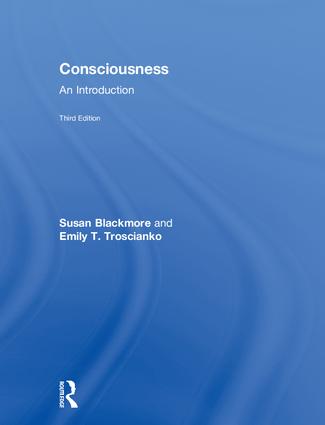 Is there a theory that explains the essence of consciousness?

Or is consciousness itself an illusion?

Am I conscious now?

Now considered the 'last great mystery of science', consciousness was once viewed with extreme scepticism and rejected by mainstream scientists. It is now a significant area of research, albeit a contentious one, as well as a rapidly expanding area of study for students of psychology, philosophy, and neuroscience.

This edition of Consciousness, revised by author team Susan Blackmore and Emily Troscianko, explores the key theories and evidence in consciousness studies ranging from neuroscience and psychology to quantum theories and philosophy. It examines why the term ‘consciousness’ has no recognised definition and provides an opportunity to delve into personal intuitions about the self, mind, and consciousness.

Featuring comprehensive coverage of all core topics in the field, this edition includes:

Complete with key concept boxes, profiles of well-known thinkers, and questions and activities suitable for both independent study and group work, Consciousness provides a complete introduction to this fascinating field. Additional resources are available on the accompanying companion website: www.routledge.com/cw/blackmore

Competent, entertaining and accessible. It covers an enormous range of topics from machine consciousness to altered states and secular spirituality. This new edition is probably the best introduction to the exploding field of consciousness studies.

Blackmore and Troscianko’s book remains the best introduction to consciousness on the market. The sheer breadth of literature that is reviewed and evaluated will not only satisfy the most enquiring of academic minds, but also succeeds in delivering a great deal of academic content in an enjoyable, readable and accessible style for any interested reader. It provides a comprehensive introduction to so many relevant features of consciousness, making it the go-to book for anyone interested in the field. Blackmore and Troscianko have managed what might have seemed impossible: they’ve made a great book even greater.

Revised, updated, and supplemented with new perspectives, this third edition is a friendly and sure-footed guide through the dense forest of consciousness studies. Packing their text with activities, practice exercises, and quotations, the authors not only inform their readers about the science and philosophy of consciousness, but also teach them how to think about the topic for themselves. A superb introduction to a fascinating field.

What is consciousness, and how can it arise within the natural order? This remarkable book offers concise, colourful, and provocative windows into nearly every corner of this complex, multi-disciplinary debate. The result is a comprehensive, user-friendly guide to one of the most conceptually puzzling and scientifically challenging questions of our time.

The Third Edition of Consciousness is choc a bloc with ideas, data and literary references. I am enjoying reading it from cover to cover.

For anyone interested in plunging into the murky but entrancing depths of the psychology, philosophy, and neuroscience of consciousness, B&W’s book is the perfect place to start. Moreover, it is a stimulating and challenging resource for specialists in the field.

Susan Blackmore is a psychologist, TED lecturer, and writer researching consciousness, memes, meditation, and anomalous experiences, and is Visiting Professor in Psychology at the University of Plymouth. The Meme Machine (1999) has been translated into 16 languages; more recent books include Zen and the Art of Consciousness (2011) and Seeing Myself: The New Science of Out-of-BodyExperiences (2017).

is a writer and researcher interested in mental health, readers’ responses to literature, and how the two might be linked – as well as what both have to do with human consciousness. She is a Research Associate at The Oxford Research Centre in the Humanities (TORCH), University of Oxford, writes the blog 'A Hunger Artist' for Psychology Today, and has published a monograph, Kafka’s Cognitive Realism (2014), exploring the strange phenomenon we call the ‘Kafkaesque’.