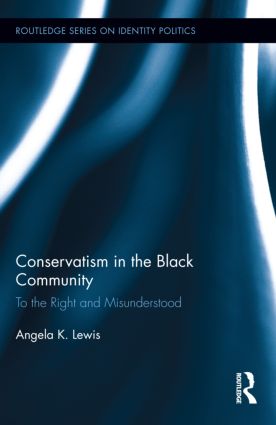 Conservatism in the Black Community

To the Right and Misunderstood, 1st Edition

While scholars have argued that the level of support for conservatism among blacks is minimal because conservatism is antithetical to black interest, there are a cadre of conservative political intellectuals and political elites in America. Do their views influence those of the wider Black population? Or does the media merely amplify their voices but with little support? What part of contemporary Black conservatism has found a home in the Tea Party movement?

Focusing on what conservatism means to Blacks at the grassroots level and in what issue areas Blacks as a whole tend to have more conservative views, this work neither critiques nor praises Black Conservatism. The results of Lewis’s mix of quantitative and qualitative methodologies will be of strong interest to students and scholars of Black politics, Black studies, and political behavior more generally.

Group identities have been an important part of political life in America since the founding of the republic. For most of this long history, the central challenge for activists, politicians, and scholars concerned with the quality of U.S. democracy was the struggle to bring the treatment of ethnic and racial minorities and women in line with the creedal values spelled out in the nation’s charters of freedom. We are now several decades from the key moments of the twentieth century when social movements fractured America’s system of ascriptive hierarchy. The gains from these movements have been substantial. Women now move freely in all realms of civil society, hold high elective offices, and constitute more than 50 percent of the workforce. Most African-Americans have now attained middle class status, work in integrated job sites, and live in suburbs. Finally, people of color from nations in Latin America, Asia, and the Caribbean now constitute the majority of America’s immigration pool.

In the midst of all of these positive changes, however, glaring inequalities between groups persist. Indeed, ethnic and racial minorities remain far more likely to be undereducated, unemployed, and incarcerated than their counterparts who identify as white. Similarly, both violence and work place discrimination against women remain rampant in U.S. society. The Routledge series on identity politics features works that seek to understand the tension between the great strides our society has made in promoting equality between groups and the residual effects of the ascriptive hierarchies in which the old order was rooted.

Some of the core questions that the series will address are: how meaningful are the traditional ethnic, gender, racial, and sexual identities to our understanding of inequality in the present historical moment? Do these identities remain important bases for group mobilization in American politics? To what extent can we expect the state to continue to work for a more level playing field among groups?