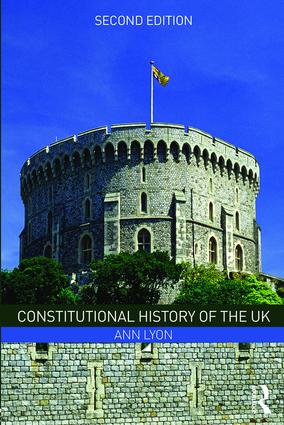 Constitutional History of the UK

This second edition has been revised and updated to bring coverage up to the present day, including parliamentary reform; the Scottish referendum on independence and further drives for enhanced devolution; the effect of EU membership on the UK Constitution; and the impact of the European Convention on Human Rights and the Human Rights Act 1998.

Constitutional History of the United Kingdom

offers an accessible and highly valuable overview for students with little or no prior knowledge of British history.

‘Constitutional History of the United Kingdom tells the story of the evolution of the constitution to the present day. It is a fascinating story, extremely well told by an historian who now teaches law. The book is of relevance to students of law, history and government, a source of reference for undergraduate law students and essential reading for postgraduate study. The author makes the point that students of law often lack a historical perspective, essential to a thorough knowledge of the UK constitution, and this work is to my knowledge, the only recent one to explain the history of the UK with a view to illuminating constitutional changes. Its sheer breadth is impressive. It begins with a description of the development of government pre-1066, followed by a sweep of 14 centuries, culminating in UK membership of the EU and the adoption of European Convention on Human Rights. Themes provide continuity to the sequence of events; so, for instance, coherence is traceable through the events that inexorably led to the balance of power shifting from king to Parliament, and to our modern democracy. It explains well the background to events that were initially often violent and, in more recent history, political, and the conundrum of the UK constitution becomes over clearer as the reader progresses. The Constitutional History of the United Kingdom should be read by all students of constitutional law but is also a work of reference and could be enjoyed by anyone seeking to further their knowledge of UK History’. Times Higher Educational Supplement, 28 May 2004.

'Students of British constitutional history will appreciate this well-written survey by Ann Lyons, a lecturer in law at the University of Wales, Swansea. The author, like her famous predecessor, F. W. Maitland, possesses expertise in both legal and general history, and she is able to interweave constitutional developments with important historical events as well as Maitland did in his classis 1908 work. Lyon's purpose is not to offer research but to compose a readable, up-to-date account for university students. The author has done an outstanding job of compressing so much information into a very readable volume, which takes into account the newest literature and most recent events in this area. A Constitutional History of the United Kingdom is recommended for students and interested general public.' History, Vol 32 No 3, Spring 2004

'This is a thorough, respectful history of constitutional developments in the United Kingdom from ancient times through to the recent changes under the European Union and the New Labour Government. This book is an excellent overview, but with much detail, of the functioning of the Ombudsman office in Great Britain. It is the starting point for understanding that institution and for teaching about future investigation of it. British Politics Group Newsletter, Autumn 2003

'This is a thorough and very readable book, especially useful for references as well as a textbook…Law students should read Lyon' Representation, Michael Rush, University of Exeter. Vol 41, Number 2, 2005.