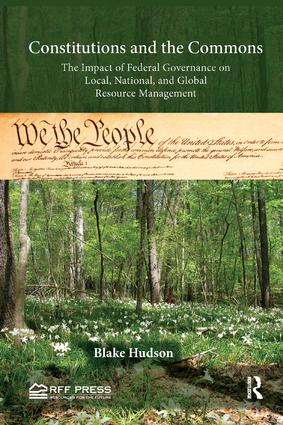 Constitutions and the Commons

Constitutions and the Commons looks at a critical but little examined issue of the degree to which the federal constitution of a nation contributes toward or limits the ability of the national government to manage its domestic natural resources. Furthermore it considers how far the constitution facilitates the binding of constituent states, provinces or subnational units to honor the conditions of international environmental treaties. While the main focus is on the US, there is also detailed coverage of other nations such as Australia, Brazil, India, and Russia.

After introducing the role of constitutions in establishing the legal framework for environmental management in federal systems, the author presents a continuum of constitutionally driven natural resource management scenarios, from local to national, and then to global governance. These sections describe how subnational governance in federal systems may take on the characteristics of a commons – with all the attendant tragedies – in the absence of sufficient national constitutional authority. In turn, sufficient national constitutional authority over natural resources also allows these nations to more effectively engage in efforts to manage the global commons, as these nations would be unconstrained by subnational units of government during international negotiations.

The book concludes by discussing how federal systems without sufficient national constitutional authority over resources may be strengthened by adopting the approach of federal constitutions that facilitate more robust national level inputs into natural resources management, facilitating national minimum standards as a form of "Fail-safe Federalism" that subnational governments may supplement with discretion to preserve important values of federalism.

Part 1: Constitutionalization of the Commons

Part 2: Decentralization of the Commons

3. Federal Systems as a Nested Commons: The Case of United States Decentralization

Part 3: Federalization of the Commons

4. Commerce in the Commons

Part 4: Internationalization of the Commons

7. Forest Commons, Climate Change, and Federalism Beyond the United States: A Survey of Federal Systems

8. Keying on Federal Systems with Weak Keystone Constitutions: The Role of Private Versus Public Forest Ownership in U.S. and Canadian Law and Policy

Blake Hudson is Associate Professor at both the Paul M. Hebert Law Center and the School of the Coast and Environment, Louisiana State University, USA.