Contemporary Psychoanalysis and the Legacy of the Third Reich
History, Memory, Tradition 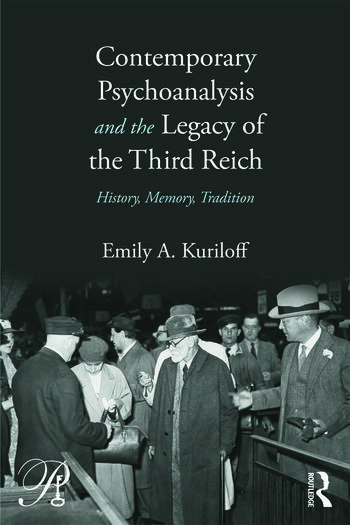 Contemporary Psychoanalysis and the Legacy of the Third Reich: History, Memory, Tradition

For most of the twentieth century, Jewish and/or politically leftist European psychoanalysts rarely linked their personal trauma history to their professional lives, for they hoped their theory—their Truth—would transcend subjectivity and achieve a universality not unlike the advances in the "hard" sciences.

Contemporary Psychoanalysis and the Legacy of the Third Reich

confronts the ways in which previously avoided persecution, expulsion, loss and displacement before, during and after the Holocaust shaped what was, and remains a dominant movement in western culture.

uses unpublished original source material, as well as personal interviews conducted with émigré /survivor analysts, and scholars who have studied the period, revealing how the quality of relatedness between people determines what is possible for them to know and do, both personally and professionally. Kuriloff’s research spans the globe, including the analytic communities of the United States, England, Germany, France, and Israel amidst the extraordinary events of the twentieth century.

Contemporary Psychoanalysis and the Legacy of the Third Reich

addresses the future of psychoanalysis in the voices of the second generation—thinkers and clinicians whose legacies and work remains informed by the pain and triumph of their parents' and mentors' Holocaust stories. These unprecedented revelations influence not only our understanding of mental health work, but of history, art, politics and education. Psychoanalysts, psychologists, psychiatrists, sociologists, cultural historians, Jewish and specifically Holocaust scholars will find this volume compelling.

Acknowledgements. Introduction by Philip Bromberg. Author’s Preface. Its Not What You Have Written Down. History Means Interpretation.Not Gentle Creatures.The Founding and The Final Hour.Throwing Stones at the Future. Like Shadows. A Child is Something Else Again. Index.Bibliography.

Emily A. Kuriloff is a Psychologist and Psychoanalyst. She is in private practice in New York City and she is Training and Supervising Psychoanalyst at the William Alanson White Institute, New York.

"This book is so unique in content, form, and authenticity, that it defies traditional boundaries. It is a book about history. It is a book about cultural upheaval. It is a book about psychic catastrophe. It is a story of human resolve and a story of survival, repair, and creativity among psychoanalytic healers whose notions influenced not just their colleagues and their patients, but all of Western culture before and after World War II." - Philip Bromberg, From the Introduction to Contemporary Psychoanalysis and the Legacy of the Third Reich

"We are all beholden to Dr. Kuriloff for her brilliant and magisterial book which provides a vital perspective on the disastrous, pervasive, and, often profoundly disowned impact of the Third Reich on psychoanalysts and their movement." - Edgar Levenson, MD fellow emeritus, faculty W.A.White Psychoanalytic Institute

"Many researchers, historians, and clinicians have grappled to penetrate the unfathomable horror of the Holocaust and its social, political and intellectual ramifications, but Kuriloff offers a uniquely open and comprehensive view of theoretical development across several countries and continents. Kuriloff carefully balances depth and sensitivity, never foreclosing on a single idea as 'the' explanation for why a theory developed in a particular way at a particular time and always being exacting but fair in her critique of previous attempts at meaning making. Her book offers an overview of the personal impact of exile, loss, trauma, and resilience during and after the Holocaust on analytic theory." Rebecca Coleman Curtis and Laura Grace, PsycCRITIQUES

"This volume contains masterful analyses of the many ways in which trauma leaves consequences, and documents how the brutal Nazi persecution in the context of different cultural environments influenced psychoanalysts' theoretical orientation, their clinical work with survivors and patients in general, and the life of psychoanalytic institutions. Dr. Kuriloff has opened new perspectives on the psychological consequences of the Holocaust, on the influence of cultural trauma on the psychological functioning of adults, and on the history of psychoanalysis and of 20th century Jewish culture. Last but not least, the humanity, openness and flexibility of her approach make these interviews and her analysis of them an exciting, thought-provoking, moving experience". – Otto Kernberg, New York Presbyterian Hospital

"This book will provoke useful discussion of the topic. It is of interest to psychoanalysis and students of the Holocaust and the history of ideas. Summing Up: Recommended. Graduate students, researchers, faculty, professionals" - R.H. Balsam, Yale University, CHOICE