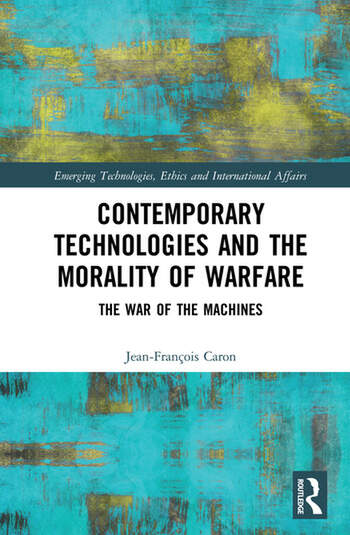 Contemporary Technologies and the Morality of Warfare: The War of the Machines

Supported by genuine historical cases, this book argues that certain new technologies in warfare can not only be justified within the current framework of the just war theory, but that their use is mandatory from a moral perspective.

Technological developments raise questions about the manner in which wars ought to be fought. The growing use of drones, capacity-increasing technologies, and cyberattacks are perceived by many as posing great challenges to Just War Theory. Instead of seeing these technologies as inherently unethical, this book adopts a different perspective by arguing that they are morally necessary since they can limit the potential violations of the moral rules of war and ensure that militaries better respect their obligation to protect their members. Caron’s research offers insights into how and under what conditions autonomous or semi-autonomous robots, artificial intelligence, cyberwarfare, and capacityincreasing technologies can be considered as legitimate weapons.

This book will be of interest to students, members of the armed forces, and scholars studying Politics, International Relations, Security Studies, Ethics, and Just War Theory.

Chapter 2: Technologies and the Military’s Duty of Care

The Military as a Profession

The Military Profession and the Duty of Care

Military Technologies and the Duty of Care

Chapter 3: The Use of Military Technologies as a Way to Increase Morality

The USS Vincennes and the Downing of Iran Air Flight 655

The My Lai and Haditha Massacres

Military Technologies and the Control of Human Emotions

Chapter 4: Military Technologies, Respect for the Rules of Warfare, and Legal Accountability

The Question of Misused Technologies

How Technologies Involving Human Beings Ought to be Tested

Chapter 5: The Morality of Killing

The Ethics of Killing in War

Contemporary Military Technologies and the Ethics of Killing in War: An Assessment

Chapter 6: Technologies and the Enhanced Risk of Warfare

The Correlation Between Military Power and the Risk of War

Military Technologies and the Prospect of Jus ad Vim