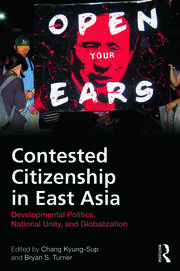 Theories of citizenship from the West – pre-eminently those by T.H. Marshall – provide only a limited insight into East Asian political history.

The Marshallian trajectory – juridical, political and social rights – was not repeated in Asia and the late nineteenth-century debate about liberalism and citizenship among intellectuals in Japan and China was eventually stifled by war, colonialism and authoritarian governments (both nationalist and communist). Subsequent attempts to import western-style democratic values and citizenship were to a large extent failures. Social rights have rarely been systematically incorporated into the political ideology and administrative framework of ruling governments. In reality, the predominant concern of both the state elite and the ordinary citizens was economic development and a modicum of material well-being rather than civil liberties. The developmental state and its politics take precedence in the everyday political process of most East Asian societies.

These essays provide a systematic and comparative account of the tensions between rapid economic growth and citizenship, and the ways in which those tensions are played out in civil society.

Kyung-Sup Chang is Professor of Sociology and Director of the Institute for Social Development and Policy Research at Seoul National University. His research interests include: developmental politics and social policy, comparative modernities (compressed modernity), post-socialist transitions in Asia. His work on these issues has appeared in journals including Economy and Society, World Development, Journal of Development Studies, International Sociology. He is also author of South Korea under Compressed Modernity: Familial Political Economy in Transition (Routledge, 2010).