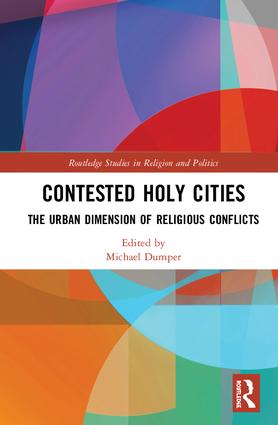 Examining contestation and conflict management within holy cities, this book provides both an overview and a range of options available to those concerned with this increasingly urgent phenomenon.

In cities in India, the Balkans and the Mediterranean, we can see examples where religion plays a dominant role in urban development and thus provides a platform for conflict. Powerful religious hierarchies, the generation of often unregulated revenues from donations and endowments, the presence of holy sites and the enactment of ritualistic activities in public spaces combine to create forms of conflicts which are, arguably, more intense and more intractable than other forms of conflicts in cities. The book develops a working definition of the urban dimension of religious conflicts so that the kinds of conflicts exhibited can be contextualised and studied in a more targeted manner. It draws together a series of case studies focusing on specific cities, the kinds of religious conflicts occurring in them and the international structures and mechanisms that have emerged to address such conflicts.

Combining expertise from both academics and practitioners in the policy and military world, this interdisciplinary collection will be of particular relevance to scholars and students researching politics and religion, regional studies, geography and urban studies. It should also prove useful to policymakers in the military and other international organisations.

"A timely exploration of the critical intersection of religion, conflict and cities. This book brings to bear comparative and inter-disciplinary perspectives on the complex ways in which religious practices and urban forms fuel collective violence. Perhaps more importantly, it also opens up a policy debate about how such religion-infused conflicts might be moderated, managed or possibly even resolved." – Liam O’Dowd, Queens University Belfast.

"This valuable collection of wide-ranging, original, interdisciplinary research illuminates the complexity and urgency of better understanding religious flash points involving time, place, and people. This book reveals the ‘uneasy equilibria’ existing in cities at the interface of politics, religion, and urban form, and the diverse stakeholders who play roles in either disrupting or managing urban-religious co-existence. Policy practitioners at all levels, and academics, will benefit from a close read." – Scott A. Bollens, University of California, Irvine, USA.

Chapter 5: Jerusalem’s Ramadan Fridays: Pilgrimage through the Bottlenecks of Occupation

Chapter 7: Protecting Cultural Property in the Event of Armed Conflict - the Work of the Blue Shield

Chapter 9: The Protection of Cultural Heritage: The Experience of the Italian Carabinieri Command

Chapter 10: The Protection of Religious Sites in the Western Balkans – Some Lessons from Recent History.

Michael Dumper is Professor in Middle East Politics, University of Exeter. His research is primarily on the Arab-Israeli conflict, especially future options for Palestinian refugees and the city of Jerusalem, and the politics of archaeology and conservation in the urban Middle East. In addition to most recent book, Jerusalem Unbound: Geography, History and the Future of the Holy City (2014) he is author of The Future of the Palestinian Refugees: Towards Equity and Peace (2007); The Politics of Sacred Space: The Old City of Jerusalem and the Middle East Conflict, 1967-2000, (2001); The Politics of Jerusalem Since 1967 (1997); editor of Palestinian Refugee Repatriation: Global Perspectives (Routledge, 2006). He is currently holder of a Leverhulme Trust Major Research Fellowship (2015-2018) comparing religious conflicts in cities and preparing another manuscript for publication in 2019.