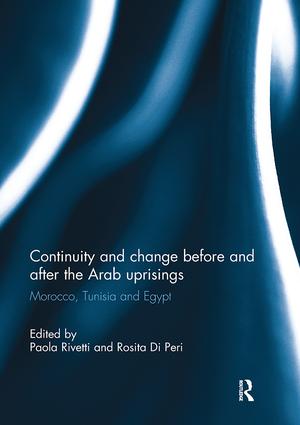 Continuity and change before and after the Arab uprisings

The Arab uprisings of 2011 have sparked much scholarly discussion with regards to democratisation, the resilience of authoritarian rule, mobilisation patterns, and the relationship between secularism and Islam, all under the assumption that politics has changed for good in North Africa and the Middle East. While acknowledging the post-2011 transformations taking place in the region, this book brings to the forefront an understudied, yet crucial, aspect related to the uprisings, namely the interplay between continuity and change.

Challenging simplified representations built around the positions that either ‘all has changed’ or ‘nothing has changed’, the in-depth case studies in this volume demonstrate how elements both of continuity, and rupture with the past, are present in the post-uprising landscapes of Morocco, Tunisia and Egypt. Public policy, contentious politics, the process of institution making and re-making, and the relations of power connecting national and international economies are at the core of the comparative investigations included in the book. The volume makes an important contribution to the study of North African politics, and to the study of political change and stability, by contrasting the different trajectories of the uprisings, and by offering theoretical reflections on their meaning, consequences and scope. This book was originally published as a special issue of the British Journal of Middle Eastern Studies.

1. Continuity and Change before and after the Uprisings in Tunisia, Egypt and Morocco: Regime Reconfiguration and Policymaking in North Africa Paola Rivetti

2. Change and Continuity after the Arab Uprising: The Consequences of State Formation in Arab North African States Raymond Hinnebusch

5. From Reform to Resistance: Universities and Student Mobilisation in Egypt and Morocco before and after the Arab Uprisings Florian Kohstall

8. An Enduring ‘Touristic Miracle’ in Tunisia? Coping with Old Challenges after the Revolution Rosita Di Peri

9. Shifting Priorities or Business as Usual? Continuity and Change in the post-2011 IMF and World Bank Engagement with Tunisia, Morocco and Egypt Adam Hanieh

10. No Democratic Change . . . and Yet No Authoritarian Continuity: The Inter-paradigm Debate and North Africa After the Uprisings Francesco Cavatorta

Paola Rivetti is a Lecturer in Politics of the Middle East and International Relations at Dublin City University, Dublin, Ireland. She is the Secretary of the Italian Society for Middle Eastern Studies, a board member of the European Iran Research Group, and contributes to the blog Presidential Power. She is involved in an international research project on youth cultures in the MENA region.

is a Lecturer in Political Science & International Relations in the Department of Culture, Politics and Society at the University of Turin, Italy. She is the scientific co-ordinator of the Summer School ‘Understanding the Middle East’, and a member of the Italian Society for Middle Eastern Studies.