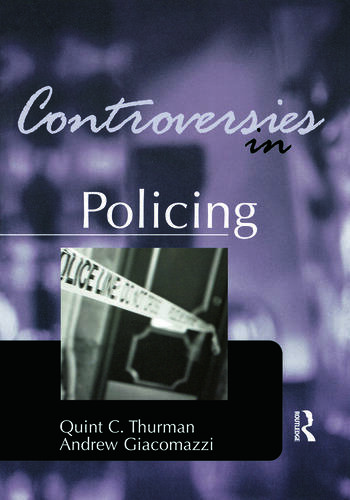 This book of original essays presents controversial topics, then encourages the readers to consider what they think ought to be done. The selections identify several of the existing issues in policing about which something needs to be done; then, they present various viewpoints on possible solutions. This is done against the backdrop of an era of significant change in worldwide security, post-9/11, that has caused major changes in the manner in which the U.S. conducts its political, social and economic affairs.

Section I: Setting the Stage -- Policing before and after 9/11 1. Controversies in Policing before September 11, 2001 2. The Order vs. Freedom Debate after September 11, 2001 Section II: The Role of the Police in a Democratic Society 3. Policing in the Age of Terrorism 4. Community Policing: Is it Really Soft on Crime? 5. Police Culture in a Changing Multicultural Environment Section III: Operational Issues in Policing 6. Police Use of Deadly Force 7. Racial Profiling 8. "As Time Goes By:" The Expansion of Women’s Roles in Police Work Section IV: EThical Issues and Police Deviance 9. Ethical Issues in Policing 10. Police Officers, Excessive Force, and Civil Liability