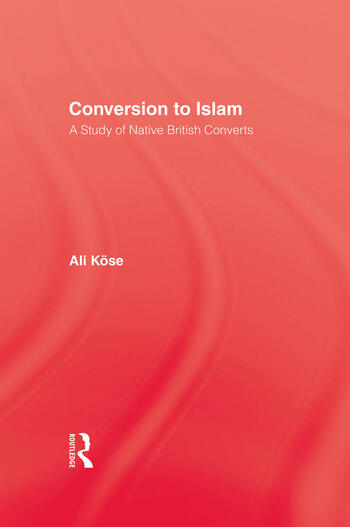 First Published in 1996. Religious conversion is an immensely complex phenomenon. The term comprises such diverse experiences as increased devotion within the same religious structure, a shift from no religious commitment to a devout religious life, or a change from one religion to another. This study focuses on the conversion experiences of 70 native British converts to Islam. It addresses the following questions - why do people become Muslims, what are the backgrounds of the converts, what are the patterns of conversion to Islam, and how far are existing conversion theories applicable to the group under study. The full range of social and psychological forces at work in the conversion experience are examined with reference to the converts, whose whole life history - childhood, adolescent experiences and the conversion process itself - were examined in detail. Chapter 1 deals with the history and present situation of both life-long Muslims and converts living in Britain. Chapter 2 focuses on childhood and adolescent experiences reviewing the psychological and sociological theories of conversion and attempts to find out how far these theories are applicable to the converts to Islam. Chapter 3 examines the backgrounds of the converts regarding religion. It then analyzes the immediate antecedents of the conversion as well as the conversion process, focussing on version motifs. A conversion process model is also developed in this chapter. Chapter 4 looks at the post-conversion period to find out what changes the converts underwent. It also examines the relationship between converts, their parents and society at large. Chapter 5 reveals the findings on conversion through Sufism. Comparisons between conversion through Sufism and through new religious movements in the West are also made. This study should be an important addition to the study of religious conversion, as conversion to Islam either from outside or within Islam is widely neglected in the literature.

Part 1 Muslims in Britain: immigrant Muslims of Britain - the history of Muslims in Britain, the contemporary Muslim community; native British Muslims - the history of native British Muslims - the Liverpool Mosque and Muslim Institute, the Woking Mission, the contemporary native British Muslims - the Islamic Party of Britain, the Association for British Muslims; Da'wah strategy in Britain - indirect Da'wah approach, direct Da'wah approach. Part 2 On the way to conversion: childhood experiences - happiness versus unhappiness, father figure in childhood - absent or withdrawn father, mother - father's substitute and independence from her, parents' affiliation and upbringing regarding religion, Freud and religious conversion; conversion and adolescence - conversion age, emotional and cognitive issues in adolescence, rebellion conversion, Eriksonian concept of identity - moratorium and conversion at a later age. Part 3 Conversion process: background analysis - religion, socio-economic status; immediate antecedents of conversion - emotional antecedents, cognitive antecedents; conversion motifs (patterns); social influence in the process of conversion and the conversion process model - the convert as a social type, conversion through marriage, conversion process model. Part 4 Postconversion - the transformed self: the new being - change - beliefs, practice and habits, maintenance and socialization, cultural transition, relations with parents, ex-friends and the society. Part 5 Conversion through Sufism: Sufism - the agent of Islam, Sufism in the West; Sufism and new religious movements (NRMs) in the West - resemblance between Sufis and NRMs' members with regard to their background; the group of Shaykh Nazim - mission in Britain, initiation to the group, Dhikr and the belief of lower-self, basic teachings of the Shaykh which play major role in attracting converts and some features of the group, leader-member relations, psychotherapeutic treatment; findings on Sufi and non-Sufi differences regarding their backgrounds and conversion experiences.