Corporate Risks and Leadership
What Every Executive Should Know About Risks, Ethics, Compliance, and Human Resources 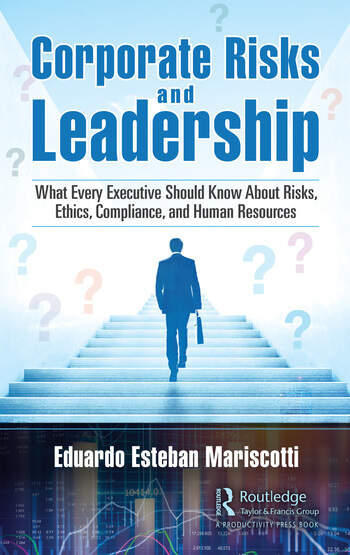 Corporate Risks and Leadership: What Every Executive Should Know About Risks, Ethics, Compliance, and Human Resources

The context of business has been changing for companies in recent years, and following numerous corporate and accounting scandals, many countries have increased the number of national and international regulations designed to ensure transparency and compliance with the law. Because of the existence of these new regulations, the level of control, the severity of sanctions by governments, and the amount of the fines for noncompliance have increased dramatically.

In parallel, with the technological revolution in communications, business management has become more transparent, and any negative event is uploaded to social networks and shared with an indeterminate number of people. This change in the regulatory, sanctioning and technological context has forced large companies to rethink risks, investments and budgets to deal in this more complex environment.

To transition to this change, some companies have included ethics and compliance programs in their corporate agenda, along with marketing and sales plans, strategies, growth targets, investment plans and/or talent acquisition. While each industry has its particular risks, in this book, the author describes the essential elements that any effective ethics and compliance program should contain.

This book is a source of information that connects yesterday with today. The author shares observations and lessons of the past to suggest corporate leaders implement effective ethics and compliance programs to protect their organizations and themselves. The book covers theories of ethics but with an eye focused on practical application. Risks, ethics, and compliance are analyzed with an overall vision, connected to the reality of business life, without getting bogged down in abstract thinking or in technical and regulatory details.

Ethics and compliance are disciplines that have increasingly achieved greater recognition in organizations. Thus, due to the importance of risk management in the business world and the necessary involvement of the CEO and the board of directors, it seems appropriate that executives get access to a book about risks, ethics, compliance and human resources directed not only to compliance experts but also to any organizational leader.

This book is a wake-up call that allows business leaders to understand the benefits of implementing an effective ethics and compliance program that will help members of organizations to make the right decisions and act within the law. If they do, they can better prevent and react to the difficult obstacle course of risks, dangers and threats that organizations face and that may jeopardize the sustainability, resilience, and survival of companies.

Chapter 6 "How" to Achieve Results

Chapter 7 The Challenge of Adapting to Constant Change

Chapter 8 The Challenges of Legal and Technological Changes

Chapter 9 The Challenge of Internal Change: Vision, Motivation, and Execution

Chapter 10 Be a Proactive Leader

Chapter 11 Small Can Be Dangerous

Chapter 12 Learning from Crises to Change

Chapter 24 The Importance of Ethics and Compliance in Corporations

is a lawyer, and he graduated from the

University of Buenos Aires, Argentina. A native of Argentina, he earned a

Master of Law (LLM) in International Business Law from the University

of London in England with a scholarship from the British Council.

Aires, Argentina. He graduated from the Lee Iacocca Leadership Program

for Future Leaders in Business and Industry at Lehigh University,

Pennsylvania, and he took the Management Program for Lawyers at Yale

Eduardo worked for Baker & McKenzie at the Buenos Aires Office and

He was Chief of the Legal Department of Cablevision, one of the biggest

2011, he was General Counsel of Walmart Argentina (Director of Legal,

Ethics, Compliance, and Labor Relations) and a member of the Walmart

In 2011 he was transferred to Bentonville, Arkansas, to work at Walmart

and VP of Human Resources for the US market.

As VP of International Compliance, Eduardo designed and delivered a

global compliance strategy for the organization, excluding the US market.

He oversaw the development and delivery of compliance programs and

headcounts in facilities around the world, and supervised the review and

evaluation of compliance issues and concerns.

and executing an ethics program for over 400,000 associates spanning ten

countries across the Latin American region. He supervised a 45-member

and procedures for an organizational ethics program.

xiv • ﻿ About the Author

His expertise in Legal and Corporate Risks is supplemented by his

experience and qualifications in Business Law, Strategy, and Human

He works for Cameron Smith & Associates (CSA) in Arkansas, one of

the best headhunting firms in the world. He helps companies to recruit

top talent in the United States and around the world.

Eduardo was certified at the Society of Corporate Compliance and Ethics

(SCCE) and at the Ethics and Compliance Officer Association (ECOA).

Eduardo wrote articles about legal, ethics, and compliance in legal

publications and newspapers. He also wrote a paper for the International

In-house Counsel Journal. Eduardo has given more than 100 lectures

at Southern Methodist University in Dallas, Texas, and a member of

the Board of Directors of the National Hispanic Corporate Counsel.

At Walmart, he was Co-Founder and Treasurer of the Hispanic Officer