Corporatism, Social Control, and Cultural Domination in Education: From the Radical Right to Globalization
The Selected Works of Joel Spring 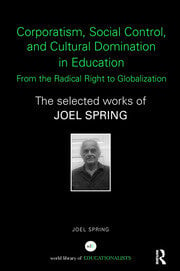 Corporatism, Social Control, and Cultural Domination in Education: From the Radical Right to Globalization: The Selected Works of Joel Spring

Starting with the 1972 publication of his seminal work, Education and the Rise of the Corporate State, Joel Spring has been documenting and analyzing the politics of knowledge and education. Throughout his work he has explored the attempts to use education to advance the economic and political interests of dominant groups. The general term he uses for the relationship between schools and power is "ideological management." His scholarly work first looked at the influence on American schooling of business and economic doctrines embodied in human capital theories and consumerism. The next step in his exploration of the politics of knowledge was to examine these issues in the context of globalization, leading to a proposed educational rights amendment to national constitutions and a new paradigm for education, both of which might ensure that schools are protected from ideological management by economic and political elites. Spring’s indigenous background has strongly shaped his interest in the political and economic goals of schooling, particularly the attempts of those in power to use schools to destroy indigenous languages and cultures.

In this collection, Spring brings together 10 of his key writings, providing an overview not just of his own career but the larger contexts in which it is situated. In the Introduction he reviews the evolution and scope of his work and his earlier arguments and reflects on its central themes, which are reflected in the writings selected for this volume.

In the World Library of Educationalists, international scholars themselves compile career-long collections of what they judge to be their finest pieces – extracts from books, key articles, salient research findings, major theoretical and/practical contributions – so the world can read them in a single manageable volume. Readers will be able to follow the themes and strands of their work and see their contribution to the development of a field, as well as the development of the field itself. Contributors to the series include: Michael Apple, James A. Banks, Stephen J. Ball, Elliot Eisner, Howard Gardner, John Gilbert, Ivor F. Goodson, Peter Jarvis.

1. Corporatism, Social Control, and Cultural Domination: From the Radical Right to Globalization  2. The Corporate State and Schools. Education and the Rise of the Corporate State: The Philosophy of the Corporate State  3. Anarchist Critics of Public Schools. Anarchism and Education: A Dissenting Tradition  4. Free Schools and Deschooling. Wheels in the Head: Free Space and No Schools  5. Choctaw Tribal Roots. Choctaw and Family History: A Basket of Apples  6. Alaskan Island. Alaskan Visions  7. The Politics of Knowledge. The Republican Education Agenda for the Twenty-First Century: The Culture Wars  8. Education and Globalization. Education and White Love: The Foundation and Language of the Global Economy  9. Consumer Capitalism and Schools. Horace Mann Meets the Wizard of Oz  10. New Goals for Global Schools: Long Life and Happiness. Goals for a Global School System  11. Global Educational Rights and Proposed Constitutional Amendment. A Constitutional Provision for Educational Rights. Proposal for Amendment to U.S. Constitution

Joel Spring is Professor of Education, Queens College and the Graduate Center of the City University of New York, USA.