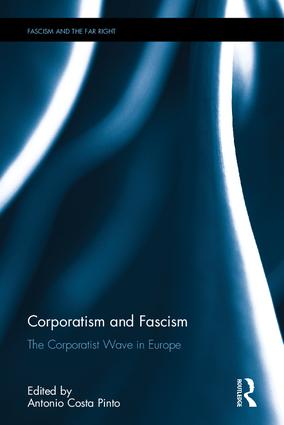 Through the development of specific indicators in ‘critical junctures’ of regime change and institutionalization, as well as qualitative data based on different sources such as party manifestos, constitutions and constitutional reforms, expert commissions and the legislation that introduces corporatism, this book traces transnational sources of inspiration in different national contexts.

By bringing together a number of both established and new voices from across the field, this book will be of interest to students and scholars of fascism, dictatorship and modern European politics.

2 Corporatism and Political Catholicism: The Impact of Catholic Corporatism in Inter-war Europe

3 The fascist Labour Charter and its transnational spread

4 The Rise and Fall of Corporatist constitutionalism: A sociological thesis

7 ‘Corporatist State’ and enhanced authoritarian dictatorship: The Austria of Dollfuss and Schuschnigg (1933–1938)

8 The Corporatist Chamber of the "New State" in Portugal: Organized Interests and Public Policy

12 Authoritarianism and corporatism in the Baltic States: The case of Estonia during the 1930s

13 "Ideas in flux…": the ‘4th of August’ dictatorship in Greece as a political departure in search of destination

Antonio Costa Pinto is Professor of Contemporary European History and Politics at the Institute of Social Sciences, University of Lisbon, Portugal.