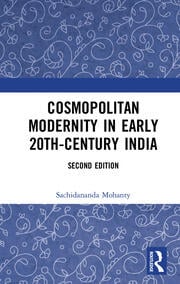 This book presents an alternative view of cosmopolitanism, citizenship and modernity in early 20th-century India through the multiple lenses of mysticism, travel, friendship, art, and politics. It makes a key intervention in the understanding of cosmopolitan modernity based on the lives and experiences of Rabindranath Tagore, Ananda Coomaraswamy, Sri Aurobindo, Mirra Alfassa, James Cousins, Paul Richard, Dilip Kumar Roy, and Taraknath Das. Using archival texts and photographs, Mohanty interrogates the ideas of tradition and modernity, the local and the global, and Self and the world as integral to the conception of a cosmopolitan world order.

Sachidananda Mohanty is Vice-Chancellor, Central University of Orissa, India. He was previously Professor and Head, Department of English, University of Hyderabad. He is the recipient of several national and international distinctions including the British Council, the Fulbright, the Salzburg, and the Katha awards. A contributing editor to the literary e-journal Muse India, he has published extensively in the fields of British, postcolonial, gender, and translation studies and has done significant work in archival research and the cultural history of 19th-century India. He is a member of India’s Commission on Education for UNESCO and the Governing Board of the Auroville Foundation.

‘[This volume] builds on the seminal theorizations of pan-Asian cosmopolitanism . . . to shift the discourse to early 20th-century India . . . [Mohanty’s] deft deployment of half-forgotten figures and dusty archives may well provide relevant clues to our understanding of the globalization in process today.’

‘Skilfully using interesting archival material, Sachidananda Mohanty maps out the emergence of the concept of ‘cosmopolitan modernity’ at the beginning of the 20th century.’

‘[This] book is especially valuable for drawing attention to overlooked historical encounters that can shed light on our current concern with cosmopolitan modernity and its implications for the future of world cultures.’

, School of Culture, History and Language, ANU College of Asia and the Pacific, Canberra, Australia

‘While words like ‘modernity’, ‘cosmopolitanism’ and ‘citizenship’ are usually defined in terms of their Western genesis, here are refreshingly new definitions, which have lifted these terms from their stereotypical contexts and accorded them a new orientation in their displacement and transmigration. This text will contribute significantly to the current debate on what constitutes modernity for us.’

‘Bringing together several great thinkers, writers and activists of the twentieth century . . . Sachidananda Mohanty raises questions that are important to us now — about cosmopolitanism and cultural citizenship, decolonization and the ethics of globalisation.’