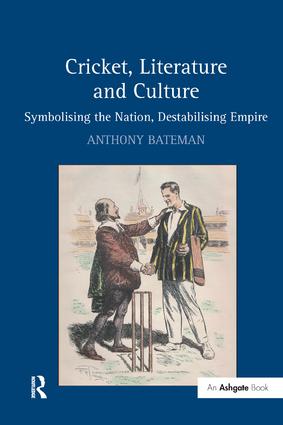 In his important contribution to the growing field of sports literature, Anthony Bateman traces the relationship between literary representations of cricket and Anglo-British national identity from 1850 to the mid 1980s. Examining newspaper accounts, instructional books, fiction, poetry, and the work of editors, anthologists, and historians, Bateman elaborates the ways in which a long tradition of literary discourse produced cricket's cultural status and meaning. His critique of writing about cricket leads to the rediscovery of little-known texts and the reinterpretation of well-known works by authors as diverse as Neville Cardus, James Joyce, the Great War poets, and C.L.R. James. Beginning with mid-eighteenth century accounts of cricket that provide essential background, Bateman examines the literary evolution of cricket writing against the backdrop of key historical moments such as the Great War, the 1926 General Strike, and the rise of Communism. Several case studies show that cricket simultaneously asserted English ideals and created anxiety about imperialism, while cricket's distinctively colonial aesthetic is highlighted through Bateman's examination of the discourse surrounding colonial cricket tours and cricketers like Prince Kumar Shri Ranjitsinhji of India and Sir Learie Constantine of Trinidad. Featuring an extensive bibliography, Bateman's book shows that, while the discourse surrounding cricket was key to its status as a symbol of nation and empire, the embodied practice of the sport served to destabilise its established cultural meaning in the colonial and postcolonial contexts.

Prize: Shortlisted for the Aberdare Literary Prize for Sports History 2010 'Cricket has been political ever since rich men placed bets on games, or Gentlemen (superior amateurs) and Players (inferior professionals) took the field together. But the politics of cricket runs deeper than that, as Anthony Bateman shows in this wide-ranging exploration. Cricket, Literature and Culture is a ground-breaking study of cricket in the English public schools, in the journalism of Neville Cardus, in the Bodyline controversy, and in the writings of C. L. R. James, amongst much else. If you want to know about the politics of the off-drive, this brilliant book is for you.' Alan Munton, University of Exeter, UK ’…unquestionably a much-needed and welcome addition to the study of sport in literature. Those unfamiliar with cricket-lit (and cricket in general) will find Bateman's study to be a very accessible introduction. Devotees will find Bateman's critical examination of the history and aesthetics of cricket-lit to be one of the more thorough treatments of the genre to date…. this is a book that was sorely needed, and Bateman has filled that void well. The twenty-three-page bibliography alone will prove to be an invaluable resource to future students of the genre or for anyone with a general interest in learning more about the history and literature of cricket… Bateman has hopefully opened the door for others who can follow his lead and give the genre of cricket literature the attention it so justly deserves.’ The Arete listserv, Sport Literature Association ’Bateman’s work should be read not simply by historians of cricket and/or national identity, but by any sports historian (and, indeed, by those in many other historical fields) with a serious interest in reading texts critically and in rethinking or refining their own approaches to their subject matter. Here is a "literary turn" absolutely worth the taking’. Sport in History '[Bateman] offers up a closely argu

Anthony Bateman is an Honorary Visiting Research Fellow at the International Centre for Sports History and Culture, De Montfort University, UK. He is co-editor of Sporting Sounds: Relationships Between Sport and Music.