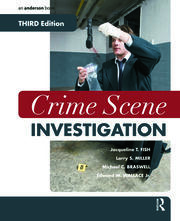 Crime Scene Investigation offers an innovative approach to learning about crime scene investigation, taking the reader from the first response on the crime scene to documenting crime scene evidence and preparing evidence for courtroom presentation. It includes topics not normally covered in other texts, such as forensic anthropology and pathology, arson and explosives, and the electronic crime scene. Numerous photographs and illustrations complement text material, and a chapter-by-chapter fictional narrative also provides the reader with a qualitative dimension of the crime scene experience.

Larry S. Miller is Distinguished Professor and Chair of Criminal Justice and Criminology at East Tennessee State University (ETSU). He received his Bachelor of Science from ETSU, a Master of Science from Eastern Kentucky University, and his Ph.D. in Health & Safety with collaterals in Forensic Anthropology and Criminology from The University of Tennessee. Miller, who has worked as a police officer, criminal investigator, and crime laboratory director, teaches in the area of law enforcement and is the author of several books on topics including criminal investigation, criminal justice report writing, police photography, and more.

Dr. Michael C. Braswell is Professor Emeritus of Criminal Justice and Criminology at East Tennessee State University (ETSU). Braswell received his Bachelor of Arts in Psychology from Mercer University in 1969, a Master of Arts in Psychology from West Georgia College in 1970, his Ed.S. in Rehabilitation/Correctional Counseling from the University of Georgia in 1973, and his Doctorate in Counseling Psychology from the University of Southern Mississippi. A former prison psychologist, he taught ethics and human relations courses for more than 30 years at East Tennessee State University. He has published books on ethics, peacemaking, and correctional counseling as well as two novels and a short story collection.