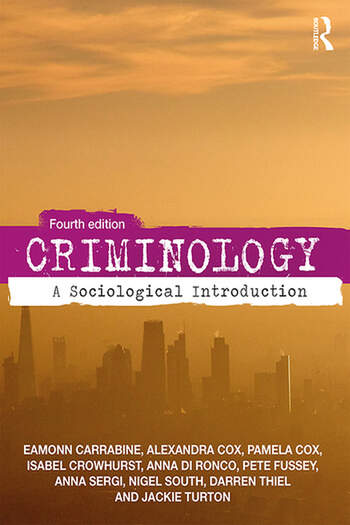 Comprehensive, critical and accessible, Criminology: A Sociological Introduction offers an authoritative overview of the study of criminology, from early theoretical perspectives to pressing contemporary issues such as the globalisation of crime, crimes against the environment, terrorism and cybercrime.

Authored by an internationally renowned and experienced group of authors in the Department of Sociology at the University of Essex, this is a truly international criminology text that delves into areas that other texts may only reference. It includes substantive chapters on the following topics:

• Theoretical approaches to crime and the issue of social change;

• Criminal justice and the sociology of punishment;

• Crime and the media;

The new edition fuses global perspectives in criminology from the contexts of post-Brexit Britain and America in the age of Trump, and from the Global South. It contains new chapters on cybercrime; crimes of the powerful; organised crime; life-course approaches to understanding delinquency and desistance; and futures of crime, control and criminology.

Each chapter includes a series of critical thinking questions, suggestions for further study and a list of useful websites and resources. The book also contains a glossary of the criminological terms and concepts used in the book. It is the perfect text for students looking for a broad, critical and international introduction to criminology, and it is essential reading for those looking to expand their ‘criminological imagination’.

Eamonn Carrabine is a professor of sociology at the University of Essex, where his teaching and research interests lie in the fields of criminology, cultural studies and sociology more generally. He has published prolifically in leading journals including the British Journal of Criminology, Criminology and Criminal Justice, Current Sociology, Deviant Behavior, The Howard Journal of Criminal Justice, Punishment and Society, Sociological Review, Sociology, Theoretical Criminology and Crime, Media, Culture. His books include Crime in Modern Britain (co-authored, 2002), Power, Discourse and Society: A Genealogy of the Strangeways Prison Riot (2004), Crime, Culture and the Media (2008) and Crime and Social Theory (2017). He currently co-edits the journal Crime, Media, Culture with Michele Brown (University of Tennessee) and they have recently edited the Routledge International Handbook of Visual Criminology (2017). With Avi Brisman (Eastern Kentucky University) and Nigel South (University of Essex) he has also co-edited the Routledge Companion to Criminological Theory and Concepts (2017). He was recently awarded a Leverhulme Trust Major Research Fellowship to research his project ‘The Iconography of Punishment: From Renaissance to Modernity’, which will be published as a book.

is a lecturer in the Department of Sociology at the University of Essex. She previously served as an assistant professor of Sociology at SUNY New Paltz, where she ran the department’s concentration in criminology and was a Research Scholar in Law at Yale University Law School’s Justice Collaboratory. She received her PhD in Criminology from the University of Cambridge. Her book, Trapped in a Vice: the Consequences of Confinement for Young People, was published in 2018. She is a former Gates Cambridge scholar and a Soros Justice Advocacy fellow.

is a professor specialising in criminal justice history, social history and gender. She has worked as a youth justice and family justice consultant for UK local authorities and international NGOs. She has published recent articles in, amongst others, the British Journal of Criminology, History Workshop, Howard Journal and the Journal of Law and Society. Her books include Young Criminal Lives: Life Courses and Life Chances from 1850 (co-authored, 2017), Bad Girls in Britain: Gender, Justice and Welfare, 1900–1950 (2012/2003) and Becoming Delinquent: European Youth, 1650–1950 (co-edited, 2002). She is currently leading an interdisciplinary ESRC project on victims’ access to justice in English criminal courts over three centuries.

is a senior lecturer, and her main research is concerned with the construction and socio-legal treatment of non-normative sexual practices and intimate lives, and how they are negotiated and made sense of in everyday lived experiences. Recent books include the Routledge International Handbook of Sex Industry Research (co-edited, 2018), Sexualities Research: Critical Interjections, Diverse Methodologies and Practical Applications (co-edited, 2017), and The Tenacity of the Couple Norm (co-authored, forthcoming).

is a lecturer in criminology at the Sociology Department of the University of Essex. Her research interests lie in the regulation, representation and enforcement of ‘anti-social behaviour’, and in individual’s resistance to social control in physical and digital space. She has published her research widely in leading criminology journals, including The European Journal of Criminology, Criminology & Criminal Justice, Crime, Law & Social Change, Crime, Media & Culture, and The International Journal of Crime, Law and Justice. Her more recent projects look into the local collaborative governance of prostitution in European cities, and into the role of social media in supporting (otherwise criminalised or silenced) activism – particularly environmental activism. She is also currently co-editing a book on medical misinformation and social harm in non-science based health practices, which will be published in 2019.

is a professor of sociology in the Department of Sociology at the University of Essex. Professor Fussey’s main research interests focus on surveillance, digital sociology, human rights, control and the city, and he has published widely across these areas. He is a director of the Centre for Research into Information, Surveillance and Privacy (CRISP), and research director for a five-year large-scale ESRC project analysing the human rights implications of emerging technology, with particular focus on digital policing and surveillance practices in the US, UK, Brazil, Germany and India. His other work focuses on organised crime in the EU with particular reference to the trafficking of children for criminal exploitation (a monograph - Child Trafficking in the EU: Policing and Protecting Europe’s Most Vulnerable published in 2017). Professor Fussey has also worked with and advised national and regional governments in the UK and Europe on a number of issues including the regulation of surveillance, public order policing and the security and social implications of urban mega-events. He is currently working with UN agencies on issues concerning human rights and digital technology and also leads the human rights strand of the UK’s national surveillance camera strategy.

holds a PhD in Sociology, with specialisation in Criminology, from the University of Essex, where she currently is a senior lecturer. Her specialism is in organised crime and comparative criminal justice. She has published extensively in renowned journals and she has authored three books. Anna has been visiting scholar at various institutions such as New York University, University of Melbourne and University of Montreal and she has been a consultant for the Australian Institute of Criminology. During her research she has worked with Australian Federal Police, Royal Canadian Mounted Police, FBI, Italian Antimafia, UK National Crime Agency and Europol. Anna is chair of the Early Career Researchers Network of the British Society of Criminology. She is the recipient of the 2017 'Italy Made Me' Award by the Italian Embassy in London, the 2018 Economic and Social Research Council Research Impact Award for her research on the Calabrian mafia in Australia and the 2018 Italian Chamber of Commerce award 'Talented Young Italians' for the Research and Innovation category.

is a professor in the Department of Sociology at the University of Essex. His research interests include environmental crime, green criminology and human rights; illegal and legal drug use; crime, inequalities and citizenship; theoretical and comparative criminology; and public health and community services. He is an adjunct professor in the School of Justice at Queensland University of Technology and the European Editor of Critical Criminology. He is a fellow of the Academy of Social Sciences and in 2013 received a Lifetime Achievement Award from the Division on Critical Criminology of the American Society of Criminology. With Avi Brisman and Eamonn Carrabine, he is co-editor of the Routledge Companion to Criminological Theory and Concepts (2017).

is senior lecturer with research interests in public policy, criminal justice, policing and economic sociology. He has worked as a researcher at the Home Office and the Police Foundation. He has written articles for a number of leading journals and published two sole authored monographs: Policing Terrorism: A Review of the Evidence (2009), and Builders: Class, Gender and Ethnicity in the Construction Industry (2012). He is increasingly interested in studying the powerful.

is a professor in the Department of Sociology at Essex University. She joined the university after a career in the health service and has taught sociology and criminology since 1996. In August 2016 she took on the role of deputy dean (education) for the Faculty of Social Science. Jackie has completed research projects for the Home Office, Department of Health and the Royal College of Paediatrics and Child Health linking her data analysis with policy and practice. Her most recent publication, Women and the Criminal Justice System was published in 2018.

"The British have always done critical criminology well and this is by far one of the best introductions to critical criminology available. One of the strengths of this text and what distinguishes it from many market competitors is that the authors are scholars of international distinction who do groundbreaking research and don’t just report on it.  They know their field and this allows them to avoid some of tropes and clichés encountered in other textbooks. And if you are looking for an introduction to criminology that avoids a lot of the parochialism of other texts, this is the one to read, with each new edition increasingly global in scale and ambition."

"Criminology: A Sociological Introduction continues to be one of the most accessible, engaging and stimulating Criminology textbooks on the market. Now in its fourth edition, this book takes students through the most important socio-criminological issues of our time and is a resource that they will return to throughout their degree studies."

"Like a Nebbiolo wine with well-balanced tannins, Criminology: A Sociological Introduction continues to age well; but like a nouveau, this latest edition is exuberant, fresh, vibrant and zesty! The authors should be commended for producing a volume that is both timeless and timely. It is the text for anyone interested in understanding sociological approaches to the study of crime and harm​."

"This new edition is a ‘must have’ companion to foundation courses in criminology. It's engaged with historical and contemporary debates within the field, provides updates on trends and sources, and includes new sections on life course and desistance and organized crime – all with their hallmark of the criminological imagination."

Karen A Joe Laidler, Professor of Sociology and Director of the Centre for Criminology, Department of Sociology, University of Hong Kong, Hong Kong

"This fascinating and engaging book unpacks the complex worlds of crime, criminality and criminal justice. A wonderful overview of criminology as a dynamic and critical field of inquiry and social practice. Not to be missed."