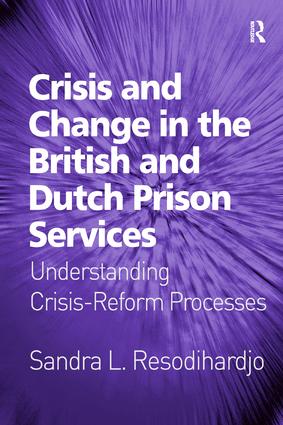 Crisis and Change in the British and Dutch Prison Services

What happens when incidents result in a policy sector losing its legitimacy? When a malfunctioning policy sector receives so much negative public attention that it has to fight for its survival? This study describes three such cases in detail within the British and Dutch Prison Services, examining the incidents, the negative response of the media and Members of Parliament to these incidents, and the way in which policy-makers tried to deal with the crises. This book establishes under which conditions such crises led to reform.

Contents: Crisis and reform in the public sector; The crisis-reform thesis: how crises can lead to reform; 2 prison systems: pre-crisis descriptions; The Dutch prison service: Cell shortages and escapes (1992-1993); Riots and reform in England (1990-1991); The escapes from Whitemoor and Parkhurst (1994-1995); Recognizing patterns of reform; Alternative paths to reform; Appendices; References; Index.

Sandra L. Resodihardjo is a lecturer at the Department of Public Administration, Leiden University. In 2007, she spent two months conducting research at the University of Manchester as a Hallsworth Visiting Professor. Her current research focuses on crises, policy making and reform; with an emphasis on the effects of agenda-setting on policy making. She is a founding member of the Dutch Policy Agendas Project.