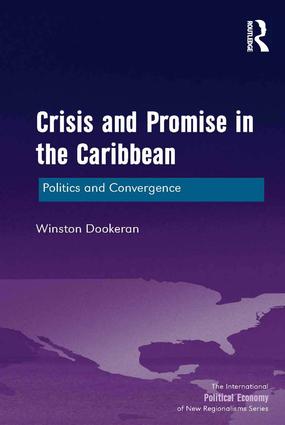 Crisis and Promise in the Caribbean

The Caribbean is made up of a complex, enigmatic region, characterised by great disparities in size, population, geography, history, language, religion, race and politics. This is a region in which harmony and discord work in tandem, trying to link economic logic with political logic. This book is a useful tool not only for those specialists and students of regionalism but for all those putting their hands to the task of nation-building and those interested in the development processes of small states and economies. At the same time, this book is a comprehensive historical record especially highlighting hindrances to development in this region. This study raises two important issues: the ’political imperative of convergence’ and the need for ’appropriate correcting mechanisms’ that align the needs of the local with the regional. It is a volume that underlines the need for a change in strategy and makes proposals as to how to go about making those changes.

"Having considered this work in its entirety, I can say that it is an excellent, distinctive synthesis of four decades of active participation in public life, by a brilliant academic who has worked tirelessly to give birth to creative proposals, designed to strengthen democracy, economic development and integration in the Caribbean region. As Secretary General of the Association of Caribbean States, I have witnessed the evolution of the concept of ’Convergence without Borders’ which is so thoroughly expounded in this book. I am convinced that said concept constitutes a powerful theoretical tool to foster these bold transformations which are necessary for the emergence and development of a new political and economic vision in the context of integration among Caribbean peoples. Advancing the process of economic cooperation for investment and mobility of capitals, with the goal of achieving productive development in the Wider Caribbean, is the point of departure towards the full development of the ’Convergence without Borders’ as proposed by the Minister of Foreign Affairs of the Republic of Trinidad and Tobago, Hon. Winston Dookeran, in this magnificent contribution to Caribbean thought." - Alfonso Munera, Secretary General, Association of Caribbean States

"Economist Winston Dookeran's Crisis and Promise in the Caribbean is by far one of the most prodigious works on redefining Caribbean society to meet the multiple challenges faced today. Crisis and Promise is conceptually progressive and implementable, and should be readily sought by academicians and policy makers throughout the region." - Dr Glenville Ashby, Kaieteur News Online

Economist, Academic, Politician, Winston Dookeran is the current Minister of Foreign Affairs in the Republic of Trinidad and Tobago and has had a distinguished career holding several important positions in his country, including Minister of Finance and Governor of the Central Bank, and outside, as a member of the Board of Governors of the Inter-American Development Bank and the World Bank. He has written several articles and books on Caribbean development and politics, and is the founding leader of The Congress of the People - a political party in Trinidad and Tobago. Educated at Naparima College in San Fernando, Trinidad, the University of Manitoba in Canada, and the London School of Economics and Political Science in the UK, Mr. Dookeran has been a lecturer at The University of the West Indies and a Visiting Scholar at the Weatherhead Centre for International Affairs, Harvard University, USA and at the United Nations University in Helsinki, Finland.