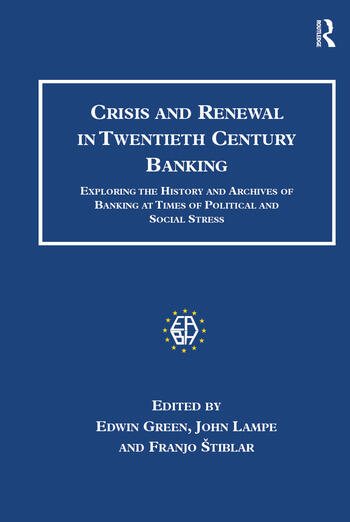 Crisis and Renewal in Twentieth Century Banking: Exploring the History and Archives of Banking at Times of Political and Social Stress

Crisis and Renewal in Twentieth Century Banking explores the behaviour of banks at times of war, revolution, civil war, social turmoil, and reconstruction. Analysing the history and archives of banks, it discovers examples of how banking is affected by political and social upheavals; how banks may influence the outcome of such events; how banking has recovered from periods of intense political and social stress; and how the archives of banks provide remarkable testimony to events in the wider world. By examining the setting of different banking markets in the last century, up to and including the transformation of Eastern and South Eastern Europe in the 1990s, this book marks a new direction for international discussion and research. Contributors include senior historians and archivists from Europe and the United States. Contributions include papers on Russia and foreign banks, 1917-30; depression and crisis in Central Europe in the 1930s; Civil War in Spain; post-war reconstruction in banking in Germany and the Far East; and crisis and renewal in South East Europe. The papers published in this collection were first presented at the twelfth Annual Conference of the European Association for Banking History, held in Ljubljana, Slovenia, in May 2001, and hosted by the Bank of Slovenia and the Nova Ljubljanska Banka.

’As an analysis of the development of European banks in their economic and political context, this book makes an important contribution to financial historiography. Moreover, its relevance to important problems recommends it to anyone interested in the ramifications of European history as a whole.’ Financial History Review