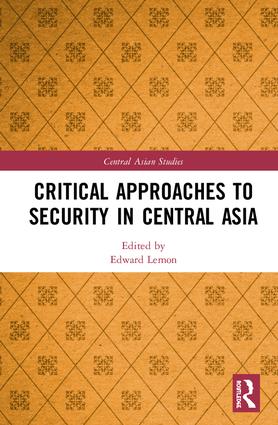 Central Asia remains on the periphery, both spatially and in people’s imaginations. When the region does attract international attention, it is often related to security issues, including terrorism, ethnic conflict and drug trafficking.This book brings together leading specialists from a range of disciplines including geography, anthropology, sociology and political science to discuss how citizens and governments within Central Asia think about and practise security.

The authors explore how governments use fears of instability to bolster their rule, and how securitized populations cope with (and resist) being labelled threats through strategies that are rarely associated with security, including marriage and changing their appearance. This collection examines a wide range of security issues including Islamic extremism, small arms, interethnic relations and border regions. While coverage of the region often departs from preconceived notions of the region as dangerous, obscure and volatile, the chapters in this book all place emphasis on the way local people understand security and harmony in their daily lives.

This book will be of interest to students and researchers of Central Asian Studies as well as Security Studies and Political Science. The chapters were originally published in the journal Central Asian Survey.

Part I: State Security Discourses and the Geopolitics of Authoritarianism

2. Framing Andijon, narrating the nation: Islam Karimov’s account of the events of 13 May 2005 Nick Megoran

3. Disorder over the border: spinning the spectre of instability through time and space in Central Asia Natalie Koch

5. The terrorist attacks in the Volga region, 2012–13: hegemonic narratives and everyday understandings of (in)security Renat Shaykhutdinov

Part II: The Discourses of Danger and Conflict Management in Central Asia

6. Locating danger: Konfliktologiia and the search for fixity in the Ferghana valley borderlands Madeleine Reeves

7. The paradox of peacebuilding: peril, promise, and small arms in Tajikistan John Heathershaw

8. ‘A wash with weapons’?: the case of small arms in Kyrgyzstan S. Neil MacFarlane and Stina Torjesen

9. In search of harmony: repairing infrastructure and social relations in the Ferghana valley Christine Bichsel

12. Navigating the safety implications of doing research and being researched in Kyrgyzstan: cooperation, networks and framing Nurbek Bekmurzaev, Philipp Lottholz and Joshua Meyer

13. Kyrgyzstan’s informal settlements: yntymak and the emergence of politics in place Bert Cramer

14. ‘The state starts from the family’: peace and harmony in Tajikistan's eastern Pamirs Till Mostowlansky