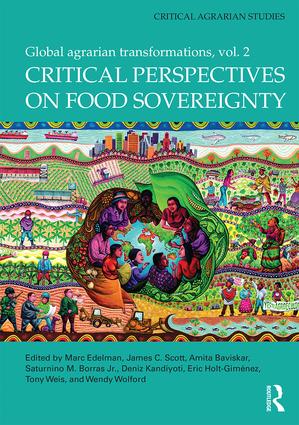 This volume is a pioneering contribution to the study of food politics and critical agrarian studies, where food sovereignty has emerged as a pivotal concept over the past few decades, with a wide variety of social movements, on-the-ground experiments, and policy innovations flying under its broad banner. Despite its large and growing popularity, the history, theoretical foundations, and political program of food sovereignty have only occasionally received in-depth analysis and critical scrutiny. This collection brings together both longstanding scholars in critical agrarian studies, such as Philip McMichael, Bina Agarwal, Henry Bernstein, Jan Douwe van der Ploeg, and Marc Edelman, as well as a dynamic roster of early- and mid-career researchers. The ultimate aim is to advance this important frontier of research and organizing, and put food sovereignty on stronger footing as a mobilizing frame, a policy objective, and a plan of action for the human future.

This volume was published as part one of the special double issue celebrating the 40th anniversary of the Journal of Peasant Studies.

7. What place for international trade in food sovereignty? Kim Burnett and Sophia Murphy

9. Life in a shrimp zone: aqua- and other cultures of Bangladesh’s coastal landscape Kasia Paprocki and Jason Cons

10. Toward a political geography of food sovereignty: transforming territory, exchange and power in the liberal sovereign state Amy Trauger

13. Food sovereignty in Ecuador: peasant struggles and the challenge of institutionalization Isabella Giunta