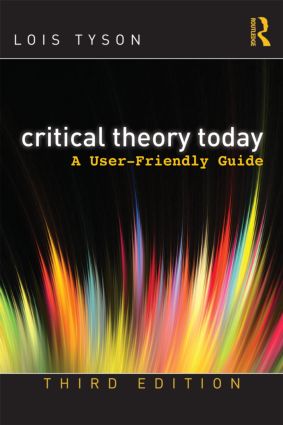 Both engaging and rigorous, this is a "how-to" book for undergraduate and graduate students new to critical theory and for college professors who want to broaden their repertoire of critical approaches to literature.

"Lois Tyson's Critical Theory Today is an accessible introduction to many of the major schools of literary interpretation. She provides clear explanations and illuminating cross-comparisons that work very effectively in the undergraduate classroom." Elizabeth Renker, Professor of English, The Ohio State University, USA

"For anyone who wants to understand contemporary cultural theory, Critical Theory Today is the undisputed starting point for that understanding. No other introduction to theory presents each theory on its own terms in the way that Lois Tyson's indispensable work does. She combines penetrating clarity with theoretical sophistication in order to create a book that everyone can learn from. The welcome new third edition provides a keyhole into what's going on right now in the rapidly changing world of contemporary theory." Todd McGowan, Associate Professor, The University of Vermont, USA

"An encyclopedic and eminently readable book, one that should be an authoritative vade mecum for both undergraduates and graduates alike, plus those faculty teaching such courses and wishing a quick refresher." David Greetham, Distinguished Professor, City University of New York, Graduate Center, USA

Praise for the Second edition:

'Tyson has covered the entire range of current theories and presents them in accessible prose…she makes psychoanalysis come alive as a body of ideas that can help the students learn important things about their lives and, as a result, about Literature…it is better than any other work I have seen…I would use it as the text in an introduction to theory for undergraduates…also be a regular source in a number of other courses, since its coverage of a range of theories makes it a fine starting point in numerous cases.' Walter A. Davis, Professor of English, The Ohio State University, USA

'Tyson's incomparable critical theory textbook is the long-awaited answer to my prayers…While it is intellectually rigorous, it is a kinder, gentler theory text which prioritizes encouraging students to reach and enabling them to meet its challenges, rather than intimidating and debilitating them with pretentious jargon…uniquely accessible…Tyson's respectful and thoughtful negotiation of the lesbian/gay/queer theory chapter is particularly outstanding…a tour-de-force which puts others to shame and should inhabit every personal and professional academic library…we owe her a world of gratitude for this enlightening, passionate achievement.' Roseanne Hoefel, Department of English, Alma College, USA

'The very best thing by far that has been done in the field…clear coverage of every major field in literary criticism without sacrifice of accuracy…written from a uniquely integrated theoretical perspective, it could easily be used in philosophy as well as English literature classes.' Alan Hausman, Department of Philosophy, Hunter College, City University of New York, USA

'Wise and helpful, inspiriting and provocative, reassuring and calming, comprehensive and convincing…should be adopted as an exemplar of how critical theory can be accommodated and described without sacrificing clarity and seriousness of purpose. If only those producing critical theory could hew to the expository and pedagogical standards of this volume, theory would be much more accepted as a valid and necessary part of contemporary social and intellectual life rather than as a…series of codes and ritual practised by an academic clerisy.' David Greetham, Distinguished Professor, City University of New York, Graduate Center, USA