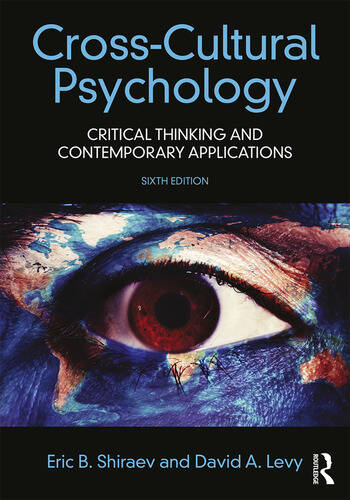 New to the 6th Edition:

Dr. Eric B. Shiraev is a professor, researcher, and author. He took his academic degrees at St. Petersburg University in Russia and completed a post-doctoral program in the United States at UCLA. He served at various positions at St. Petersburg University, NVCC, Oregon State University, George Washington University, and George Mason University. His research interests are diverse. He is an author, co-author, and co-editor of twelve books and numerous publications in the fields of global studies, history of science, cross-cultural studies, and political psychology. In his publications, he develops a distinct multi-disciplinary approach to analyze human behavior. Besides teaching and scholarly work, Eric Shiraev writes opinion essays for the media around the world. He resides near Washington DC. Visit his site: www.ericshiraev.com

has extensive experience as a teacher, therapist, writer, and researcher. He is Professor of Psychology at Pepperdine University's Graduate School of Education and Psychology, where he has been teaching graduate courses since 1986. He received his B.A. degree in theater arts from UCLA, a M.A. degree in psychology from Pepperdine University, a second M.A. degree in psychology from UCLA, and his Ph.D. in psychology from UCLA, where he specialized in social psychology, with minors in psychological assessment and personality psychology. He served as Visiting Professor of Psychology in the Soviet Union, where he delivered lectures and workshops in psychology and psychotherapy at Leningrad (now St. Petersburg) State University, the Leningrad Academy of Science, and the Bekhterev Psychoneurological Institute. He was honored as a Harriet and Charles Luckman Distinguished Teaching Fellow at Pepperdine, and was a recipient of the Shepard Ivory Franz Distinguished Teaching Award and Charles F. Scott Fellowship at UCLA. Dr. Levy holds professional licenses both in psychology and in marriage and family therapy. He has worked in a wide range of private practice and inpatient psychiatric settings, he has supervised clinical interns, and he has utilized his expertise in psychological testing (particularly the MMPI) in forensic cases.

His numerous theoretical and empirical research studies have been published in scientific journals and presented at professional conferences. His book, "Tools of Critical Thinking: Metathoughts for Psychology," garnered widespread acclaim in both academic and clinical settings for its innovative approaches to improving thinking skills. Levy co-authored (with Eric Shiraev) "Cross-Cultural Psychology: Critical Thinking and Contemporary Applications," which became an internationally best-selling textbook. Levy is the author of "Family Therapy: History, Theory, and Practice," which was the first textbook on the topic available to Russian readers. His Levy Optimism-Pessimism Scale (LOPS) has been utilized internationally in a variety of research contexts, and he is a member of the Board of Editors for the Journal of Humanistic Psychology.

Levy is also the author of numerous satirical articles, including "The Emperor's Postmodern Clothes: A Brief Guide to Deconstructing Academically Fashionable Phrases for the Uninitiated," "How to Be a Good Psychotherapy Patient," "Psychometric Infallibility Realized: The One-Size-Fits-All Psychological Profile," "Stinks and Instincts: An Empirical Investigation of Freud's Excreta Theory," and "A Proposed Category for the Diagnostic and Statistical Manual of Mental Disorders (DSM): Pervasive Labeling Disorder."

As a media consultant, Levy has appeared on dozens television and radio broadcasts (including CNN, CBS, NBC, PBS, A&E, and E!), providing psychological perspectives on current events, and examining issues and trends in the mental health fields. He has also worked as a professional director, producer, writer and actor in motion pictures, television and stage. He received an Emmy nomination for Outstanding Performance in a Network Television Series, and he was a guest star on the television series "Cheers," where he portrayed the leader of Frasier's low self-esteem group.

"Given the increasingly multicultural nature of modern societies, this insightful and mature excursion into the dynamics of cross-cultural psychology could not come at a more propitious time. This is important reading and highly recommended." – Jim Sidanius, Harvard University

"The sixth edition of this classic textbook is a must-read for those in the fields of psychology and related social and behavioral sciences. It is an engaging and informative resource for anyone interested in learning how the intricate web of cultural customs, values, and norms permeate our lives and shapes us into who we are."

"I had the privilege to use this text in teaching both undergraduate and graduate courses. This text aims to spark the students’ motivation to learn about cultural contextual variables affecting human behavior, cognitions, and emotions. It offers a critical thinking paradigm and specific exercises, which are priceless in this field and could be applied in other subfields of psychology."