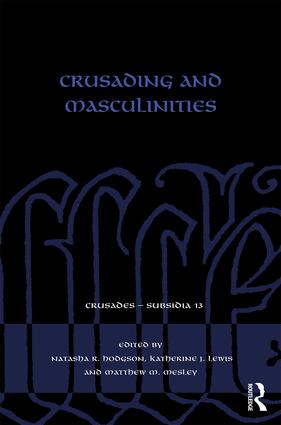 This volume presents the first substantial exploration of crusading and masculinity, focusing on the varied ways in which the symbiotic relationship between the two was made manifest in a range of medieval settings and sources, and to what ends. Ideas about masculinity formed an inherent part of the mindset of societies in which crusading happened, and of the conceptual framework informing both those who recorded the events and those who participated. Examination and interrogation of these ideas enables a better contextualised analysis of how those events were experienced, comprehended and portrayed. The collection is structured around five themes: sources and models; contrasting masculinities; emasculation and transgression; masculinity and religiosity and kingship and chivalry. By incorporating masculinity within their analysis of the crusades and of crusaders the contributors demonstrate how such approaches greatly enhance our understanding of crusading as an ideal, an institution and an experience. Individual essays consider western campaigns to the Middle East and Islamic responses; events and sources from the Iberian peninsula and Prussia are also interrogated and re-examined, thus enabling cross-cultural comparison of the meanings attached to medieval manhood. The collection also highlights the value of employing gender as a vital means of assessing relationships between different groups of men, whose values and standards of behaviour were socially and culturally constructed in distinct ways.

2. Simon Thomas Parsons, ‘The valiant man and the villain in the tradition of the Gesta Francorum: overeating, taunts and Bohemond’s heroic status.’

3. Mathew Barber, ‘Al-Afḍal B. Badr Al-Jamālī, The Vizierate and the Fatiid Response to the First Crusade: Masculinity in Historical Memory.’

4. Anne-Lydie Dubois, ‘The adolescent and the crusader: journey and rebirth on the path to manhood in the thirteenth century.’

5. Yvonne Friedman, ‘Masculine Attributes of the Other: The Shared Knightly Model.’

6. Helen J. Nicholson, ‘The true gentleman? Correct behavior towards women according to Christian and Muslim writers during the period of the crusades.’

7. Alan V. Murray, ‘Contrasting masculinities in the crusades against Lithuania: Teutonic knights and crusades in war and recreation in late medieval Prussia.’

8. James Doherty, ‘"You stayed at home as though you were the daughter of your father": gendered insults and crusading masculinities in medieval sagas’.

10. Susan B. Edgington, ‘Emasculating the enemy: Wicher the Swabian’s fight with the Saracen giant’.

12. Natasha R. Hodgson, ‘Leading the people "as duke, count and father": the masculinities of Abbot Martin of Paris in Gunther of Paris’ Hystoria Constantinopolitana.’

15. Erika Tritle, ‘A Jewish solution to the problem of excessive Christian virility in the war against Spanish Islam’.

17. David Cantor-Echols, ‘Kingship on crusade in the Chronicle and Poem of Alfonso XI of Castile’.

19. Robert B. Desjardins, ‘Lest his men mutter against him’: Chivalry and artifice in a Burgundian crusade chronicle’.

Natasha R. Hodgson is Senior Lecturer in Medieval History and Director of the CSRC at Nottingham Trent. She wrote Women, Crusading and the Holy Land and is completing Gender and the Crusades for Palgrave Macmillan. She edits Routledge series’ Advances in Crusades Research and Themes in Medieval and Early Modern History and co-edits the journal, Nottingham Medieval Studies.

is Senior Lecturer in History at the University of Huddersfield. She researches later medieval religious and cultural history. She has published on hagiography and saints’ cults (especially St Katherine of Alexandria), on medieval women, and on masculinity, including Kingship and Masculinity in Late Medieval England.

is an Associate Lecturer at Bath Spa University and Visiting Research Fellow at the University of Huddersfield. He was formerly a SNSF postdoc at the University of Zürich. His chapter "Chivalry, Masculinity and Sexuality", is published in the forthcoming Cambridge Companion to the Literature of the Crusades.

The series of Subsidia to the journal Crusades is designed to include publications deriving from the conferences held by the Society for the Study of the Crusades and the Latin East along with other volumes associated with the society.

The scope of the series parallels that of the journal itself: Crusades covers seven hundred years from the First Crusade (1095-1102) to the fall of Malta (1798) and draws together scholars working on theaters of war, their home fronts and settlements from the Baltic to Africa and from Spain to the Near East and on theology, law, literature, art numismatics and economic, social, political and military history.