Cultural Forms of Protest in Russia 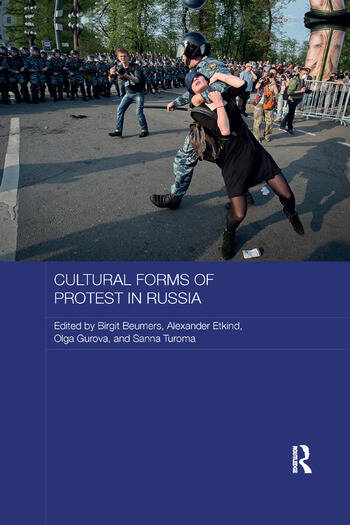 Cultural Forms of Protest in Russia

Alongside the Arab Spring, the 'Occupy' anti-capitalist movements in the West, and the events on the Maidan in Kiev, Russia has had its own protest movements, notably the political protests of 2011–12. As elsewhere in the world, these protests had unlikely origins, in Russia’s case spearheaded by the 'creative class'. This book examines the protest movements in Russia. It discusses the artistic traditions from which the movements arose; explores the media, including the internet, film, novels, and fashion, through which the protesters have expressed themselves; and considers the outcome of the movements, including the new forms of nationalism, intellectualism, and feminism put forward. Overall, the book shows how the Russian protest movements have suggested new directions for Russian – and global – politics.

Part I: Origins and traditions of protest

4. Are copycats subversive? Strategy-31, the Russian Runs, the Immortal Regiment and the transformative potential of non-hierarchical movements
Mischa Gabowitsch

6. Even the toys are demanding free elections: humour and the politics of creative protest in Russia
Jennifer G. Mathers

10. On the (im)possibility of a third opinion
Kristina Norman

11. Performing poetry and protest in the age of digital reproduction
Marijeta Bozovic

12. When satire does not subvert: Citizen Poet as nostalgia
Sanna Turoma

Alexander Etkind is Professor of the History of Russia–Europe Relations at the European University Institute, Florence, Italy.

Olga Gurova is a Research Fellow in the Department of Social Research at the University of Helsinki, Finland.

Sanna Turoma is a Senior Research Fellow at the Aleksanteri Institute, University of Helsinki, Finland.