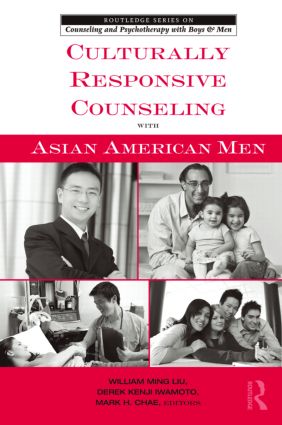 Asian American men represent a complex group with distinct psychological and mental health concerns, yet the current counseling literature is lacking in resources for clinicians working with this population. The purpose of this text is to provide practitioners with a comprehensive overview of the current research and theory related to the important and unique issues that Asian American men experience. It offers clinicians culturally-responsive, practical counseling techniques and strategies to help inform them on how to work effectively with this group. Chapters are written by leading figures in the field and explore such topics as intergenerational conflict, racism, challenges associated with masculinity and fatherhood, sexual orientation identity development, substance abuse, and career counseling. Numerous clinical vignettes and case conceptualizations are included to assist clinicians who work with Asian American men and to demonstrate appropriate treatment responses.

Culturally Responsive Counseling with Asian American Men, edited by William Liu, Derek Kenji Iwamoto, and Mark Chae, challenges the stereotype of Asian American men as the model minority. This is a must read! I will strongly recommend it to my students and colleagues. Ronald F. Levant, EdD, ABPP, 2005 President, the American Psychological Association; Professor of Psychology, The University of Akron

he first of its kind - this book will be both transformative and foundational. Their integration of theory and empirical research with clinical vignettes and counseling interventions will position their work as a foundation for scholars and practitioners alike. Alvin N. Alvarez, PhD, Professor and Coordinator, College Counseling Program, San Francisco State University

The Routledge Series on Counseling and Psychotherapy with Boys and Men

The Routledge Series on Counseling and Psychotherapy with Boys and Men includes books devoted to the process of helping boys and men in counseling and psychotherapy. Through his many roles as a professor of psychology at Penn State Harrisburg, a fellow and former president of Society for the Psychological Study of Men and Masculinity (SPSMM), and a national leader regarding the psychology of boys, men and masculinity, Dr. Mark Kiselica serves as the editor of the series, which addresses a wide variety of topics, including: