Culture and Education
Looking Back to Culture Through Education 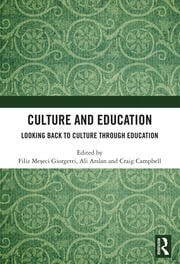 Culture and Education: Looking Back to Culture Through Education

This book explores the fascinating and complex interactions between the ways that culture and education operate within and across societies. In some cases, education is imagined as an integrated part of general cultural phenomena; in others, educational interventions become the means for transforming the cultural circumstances of different populations. The contributors to this volume show how certain educational practices produce new cultural and professional knowledge; discuss the impacts of initially foreign educational ideas and institutions on established cultural institutions in very different societies; and explore the impacts of modernity and modern educational ideas on more traditional gendered and religious practices and communities.

The book also provided striking examples of when these impacts were not benign. Increasingly powerful twentieth-century governments attempted to use education and schools to produce new, reformed citizens suitable for their newly created colonial, national, socialist, and fascist states. The expectation was that cultural and social transformation might be engineered, in major part, through schooling.

This book was originally published as a special issue of Paedagogica Historica.

Introduction – Culture and education: looking back to culture through education  1. A culture of knowledge production: testing and observation of Dutch children with learning and behavioural problems (1949–1985)  2. A new educational model and the crisis of modern terminologies: a view of Egypt in the nineteenth century  3. The cult of order: in search of underlying patterns of the colonial and neo-colonial ‘‘grammar of educationalisation’’ in the Belgian Congo. Exported school rituals and routines?  4. Creating an educational home: mothering for schooling in the Australian Women’s Weekly, 1943–1960  5. A case study of women instructors and their education in the reign of Abdulhamid II  6. Useful citizens, useful citizenship: cultural contexts of Sámi education in early twentieth-century Norway, Sweden, and Finland  7. Whose children are they? A transnational minority religious sect and schools as sites of conflict in Canada, 1890–1922  8. The foundation of the Turkish National Student Union and the attendance of the International Student Union at the Second Warsaw Congress  9. Heroism and Volksgemeinschaft (ethnic community) in National Socialist education 1933–1945  10. National unity in cultural diversity: how national and linguistic identities affected Swiss language curricula (1914–1961)  11. Household bibis, pious learning and racial cure: changing feminine identities in colonial India, 1780–1925  12. The student in the Polish socialist secondary school (1945–1989): a cultural context

Filiz Meşeci Giorgetti is Associate Professor of the History of Education at Istanbul University, Turkey. Her teaching and research interests include the history of Turkish education of the nineteenth and twentieth centuries. Her historical research has focused on the roots of educational rituals, and the educational politics of the early Republican period in Turkey. Her latest book is the first book in Turkey about educational rituals: Eğitim Ritüelleri (2016), and her current research project is writing the history of one of the important lycée of İstanbul.

is Professor of History at Istanbul University, Turkey, where he was Chair of the Department of History from 2011 to 2014. His studies are in the field of education history, history and strategy. He formerly worked as an educational consultant for the Turkish Cooperation and Coordination Agency.

Craig Campbell is an Honorary Associate Professor at the University of Sydney, Australia. His books cover subjects including the history of schooling in Australia and the South West Pacific, school markets, and secondary schooling. He is currently writing a biography of Australia's leading feminist educator, Jean Blackburn. He is a former executive member of the International Standing Conference of the History of Education and is currently President of the Australian and New Zealand History of Education Society. He edits the online Dictionary of Educational History in Australia and New Zealand.