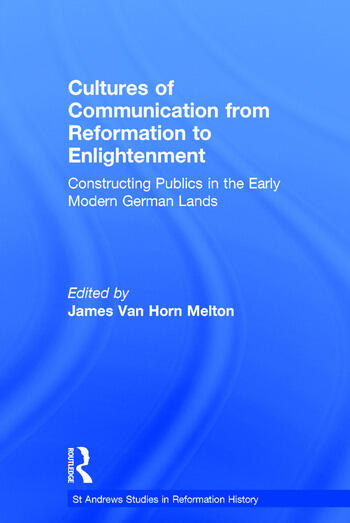 Cultures of Communication from Reformation to Enlightenment: Constructing Publics in the Early Modern German Lands

Focusing on the territories of the Holy Roman Empire from the early Reformation to the mid-eighteenth century, this volume of fifteen interdisciplinary essays examines some of the structures, practices and media of communication that helped shape the social, cultural, and political history of the period. Not surprisingly, print was an important focal point, but it was only one medium through which individuals and institutions constructed publics and communicated with an audience. Religious iconography and ritual, sermons, music, civic architecture, court ceremony, street gossip, acts of violence, are also forms of communication explored in the volume. Bringing together scholars from diverse disciplines and scholarly backgrounds, this volume transcends narrow specializations and will be of interest to a broad range of academics seeking to understand the social, political and cultural consequences of the "information revolution" of Reformation Europe.

'... the volume include[s] a number of very strong contributions providing some fascinating insights into the history of early modern Germany.' History '... a collection of absorbing and thought-provoking case studies, each having valuable implications for general historical interpretation...' Sixteenth Century Journal