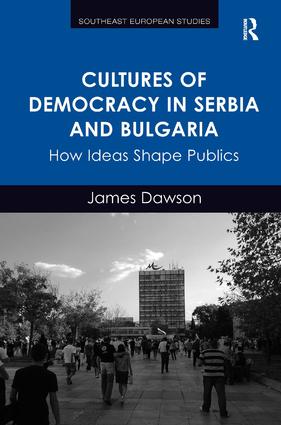 Cultures of Democracy in Serbia and Bulgaria

At a time when some EU member states are attracting attention for the rise to power of illiberal, anti-democratic political movements, this book’s analytical focus on ideas and identities helps explain why institutional progress is not necessarily reflected in the formation of liberal, democratic publics. Starting from the premise that citizens can only uphold the institutions of liberal democracy when they understand and identify with the principles enshrined in them, the author applies normative public sphere theory to the analysis of political discourse and everyday discussion in Serbia and Bulgaria. From this perspective, the Serbian public sphere is observed to be more contested, pluralist and, at the margins, liberal than that of Bulgaria. Considering that Bulgaria has been a full EU member since 2007 while Serbia remains stuck in the waiting room, it is argued that democratic cultures are not shaped by elite-led drives to meet institutional criteria but rather by the spread of ideas through politics, the media and the discussions of citizens. Moving beyond the narrow focus on institutions that currently prevails in studies of democratization, this book demonstrates the value of a more ethnographic and society-oriented approach.

’Through a comparison of public spheres in Bulgaria and Serbia, this book illustrates the weaknesses of current measurements of democracy. Dawson’s ethnographic approach allows him to demonstrate the counterintuitive conclusion that Serbia has a more solid foundation for liberal democracy than EU member Bulgaria. Of tremendous interest for anyone interested in democratic transitions, democracy promotion, and liberal theory more generally.’ Chip Gagnon, Ithaca College, USA ’There is a troubling gap in the literature on democratic transformations: the cultural dimension of these processes is insufficiently explored and poorly understood. This book fills this gap in the most persuasive manner. Based on an ingeniously conceived ethnography of public spaces, carefully calibrated comparative design, and masterfully collected evidence the author shows that the ranking of political systems based on the formalist criteria, employed for example by Freedom House, is not as conclusive as it is often assumed. A different picture - arguably more accurate - emerges when the political cultures revealed through the detailed analysis of public debates are compared.’ Jan Kubik, Rutgers University, USA ’Cultures of Democracy in Serbia and Bulgaria is a timely and much needed text. It is an important contribution to the studies of the public sphere, as it raises important questions about the nature of democracy, democratic participation and ways of measuring it. The book raises crucial questions about formalised measurements of democracy, and explores the public spheres as sites of contention and complication. Moreover, Cultures of Democracy provides new and fascinating empirical material on Serbian and Bulgarian public spheres, making it a welcome addition to the study of South Eastern Europe.’ Jelena Obradovic-Wochnik, Aston University, UK

James Dawson lectures at the School of Public Policy, University College London, where he currently serves as Director of MSc Democracy and Comparative Politics.