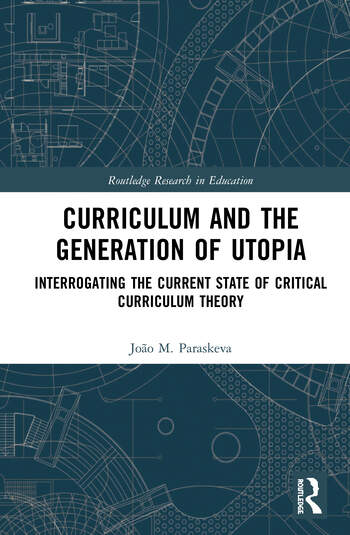 Curriculum and the Generation of Utopia: Interrogating the Current State of Critical Curriculum Theory

As a follow-up to Towards a Just Curriculum Theory and Curriculum Epistemicide , this

volume illuminates the challenges and contradictions which have prevented

critical curriculum theory from establishing itself as an alternative to dominant

Curriculum and the Generation of Utopia

re-visits the work of leading progressive

how counter-dominant narratives have been suppressed by neoliberal dynamics

through an exploration of key issues including: itinerant curriculum theory,

globalization and internationalization, as well as utopianism. Foregrounding

critical curriculum theory as a vector of de-colonization and de-centralization,

This work forms an important addition to the literature surrounding critical

curriculum theory. It will be of interest to post-graduate scholars, researchers

and academics in the fields of curriculum studies, curriculum theory, and

1. What Happen to Critical Curriculum Theory? The Need to go Above and Beyond Neoliberal Rage Without Avoiding It;  2. ‘Retrogressive Anthropogenesis’ or the Great Regression;  3.El Patron Colonial de Poder. Game Over! To Resist Re-Existing and/or Re-Exist Resisting;  4. What Happen with Critical Curriculum Theory!;  5. The Generation of the Utopia: ‘Don’t Shoot Them!’;  6. Curriculum Involution. Severe Occidentosis;  7. ‘Don’t Shoot the Utopists’. Decolonize it.

João M. Paraskeva is Professor and Founding Chair of the Department of
Education Leadership and Program Director of the EdD PhD in Education
Leadership and Policy Studies at University of Massachusetts Dartmouth, MA, USA.