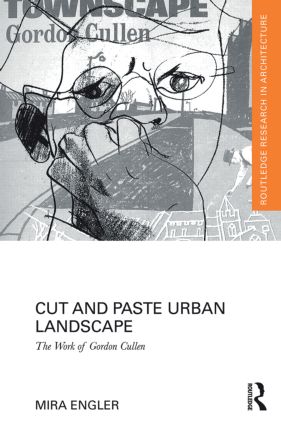 During the post-war era, the emerging consumer economy radically changed both the discourse and practice of architecture. It was a time where architecture became a mainstream commodity whose products sold through mass media; a time in which Thomas Gordon Cullen came to be one of Britain’s best-known twentieth-century architectural draftsmen.

Despite Cullen’s wide acclaim, there has been little research into his life and work; particularly his printed images and his methods of operation. This book examines Cullen’s drawings and book design and also looks into his process of image making to help explain his considerable popularity and influence which continues to this day. Itpresents the lessons Cullen had to offer in today’s design culture and practice and looks into the post-war consumerist design strategies that are still used today.

Through Mira Engler’s perceptive research, Gordon Cullen is revealed as a powerful lens, focussing a broad body of theories and techniques, and projecting them in an accessible, populist – and highly influential – manner. Cullen’s work reflects the approach of the Architectural Review and its explicit promotion of the ideas of Townscape and Serial Vision, but also embodies legacies of urban and landscape thinking that range from Repton to Le Corbusier. Engler vividly reveals the links to theories and practices of film and mass culture, positioning Cullen within a milieu shaped by Eisenstein, Debord and Benjamin, as much as the technicalities of reproduction and graphic design. Not only does Engler give Cullen his place in the history of urban design and planning, she also makes compelling connections to contemporary practices such as website design and blogging, and offers food for thought for current debates, including the critical relationship between modes of representation and the landscapes they create.

The once essential distinction between town and country has long since collapsed into an endless stream of images that not only mediates our perception but materially transforms the environment into a virtually continuous system that admits no distinctions or limits. Gordon Cullen played an essential role in this reconfiguration of our postmodern worldspace by developing a graphic vocabulary elements of which are now so ubiquitous as to go unnoticed in our saturated visual field. Engler’s important study reveals that by redrawing the obvious, the author of Townscape had an impact far greater than the limits of any town or country.

Engler (landscape architecture, Iowa State Univ.) provides illuminating insight into the Townscape movement, a post–WW II response, forwarded by architect Gordon Cullen, to dogmatic and Utopian modernist urban principles. Engler describes the development of the Townscape vision as outlined by contributors to the London-based magazine Architectural Review and illustrated by Cullen, then the magazine’s art editor. Engler contends that the Townscape idea was more clearly articulated by Cullen’s alluring cartoonish collages than by the articles. After leaving Architectural Review in 1959, Cullen published a book, Townscape (1961), that drew largely from ideas and illustrations published in the magazine. Townscape was reissued in various forms and in many languages. It primarily comprised images that could be read in various ways. Cut and Paste Urban Landscape describes the extensive, lasting influence of Cullen’s Townscape. The author holds that the non-hierarchical order of Cullen's book helps explain its long-standing popularity and that the characteristic features of the illustrations provide an open-ended definition of the Townscape idea. Thoroughly annotated and adequately illustrated, Engler's book is revealing, convincing, and a welcome addition to scholarship on 20th-century urbanism.

"Cullen’s concerns with visual literacy have been well defined in this book with its extensive bibliographies and relevant illustrations. Not only does Engler provide a valuable insight into ‘Mr Townscape’ and his place in the history of urban design and planning, she also shows his continuing influence on imagining planned landscapes."