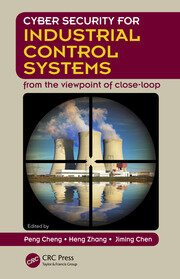 Cyber Security for Industrial Control Systems: From the Viewpoint of Close-Loop

Cyber Security for Industrial Control Systems: From the Viewpoint of Close-Loop provides a comprehensive technical guide on up-to-date new secure defending theories and technologies, novel design, and systematic understanding of secure architecture with practical applications. The book consists of 10 chapters, which are divided into three parts.

The first three chapters extensively introduce secure state estimation technologies, providing a systematic presentation on the latest progress in security issues regarding state estimation. The next five chapters focus on the design of secure feedback control technologies in industrial control systems, displaying an extraordinary difference from that of traditional secure defending approaches from the viewpoint of network and communication. The last two chapters elaborate on the systematic secure control architecture and algorithms for various concrete application scenarios.

Peng Cheng earned his BE degree in automation and his PhD degree in control science and engineering from Zhejiang University in 2004 and 2009, respectively. He was a research fellow at the National University of Singapore from 2010 to 2011 and at Singapore University of Technology and Design from 2012 to 2013. Currently, he is a full professor with the Department of Control Science and Engineering at Zhejiang University. He has served as associate editor of Wireless Networks and International Journal of Communication Systems, and as guest editor of IEEE Transactions on Control of Network Systems. His research interests include networked sensing and control, cyber-physical systems, control system security, and robust control theory and applications.

earned his BSc degree in mathematics from Jiangsu Normal University in 2004, his masters degree in mathematics and PhD in control science and engineering from Zhejiang University in 2006 and 2015, respectively. He is a faculty member of Huaihai Institute of Technology, China. He was a visiting student in the Department of Electronic and Computer Engineering, Hong Kong University of Science and Technology in fall, 2012. He has served as a guest editor of Peer-to-Peer Networking and Applications. His research interests include security and privacy in cyber-physical systems, networked control systems, and optimization theory.

earned his BSc degree and PhD degree in control science and engineering from Zhejiang University in 2000 and 2005, respectively. He was a visiting researcher at INRIA in 2006, National University of Singapore in 2007, and University of Waterloo from 2008 to 2010. Currently, he is a full professor with the Department of Control Science and Engineering, group coordinator of Networked Sensing and Control, vice director of the State Key Laboratory of Industrial Control Technology, and vice director of the Institute of Industrial Process Control at Zhejiang University, China.