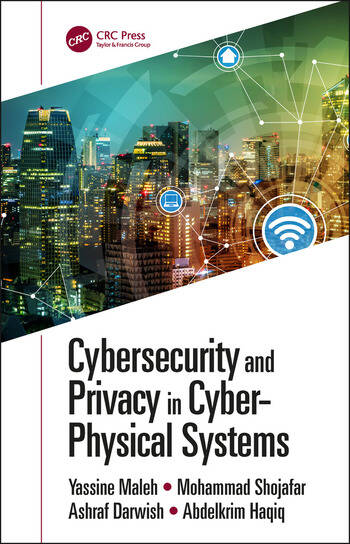 This comprehensive book promotes high-quality research by bringing together researchers and experts in CPS security and privacy from around the world to share their knowledge of the different aspects of CPS security.

received a PhD in information communication and telecommunications (advisor, Professor Enzo Baccarelli) from Sapienza University of Rome, Italy, the second-rank university in QS Ranking in Italy and top 100 in the world with an excellent degree in May 2016. He was a senior researcher participating in the European Horizon 2020 SUPERFLUIDITY project working with the Consorzio Nazionale Interuniversitario per le Telecomunicazioni (CNIT) partner under the supervision of Professors Nicola Blefari-Melazzi and Luca Chiaraviglio in the Department of Electronic Engineering at the University of Tor Vergata, Rome, Italy, for 14 months. From December 2015 to December 2016, he was a postdoctoral researcher (supervised by Dr. Riccardo Lancellotti and Dr. Claudia Canali) working on the SAMMClouds project at the University of Modena and Reggio Emilia, Italy. In January 2018, he joined the University of Padua, Italy (among the best Italian universities) as a senior researcher (Researcher Grant B). He has contributed to H2020 European projects such as SUPERFLUIDITY and TagSmartIt, and has been sponsored by the Italian Public Education Ministry (i.e., the Ministry of Education, Universities, and Research (MIUR)). In addition, he has worked as a researcher in scheduling/resource allocation in grid/cloud computing under the supervision of Professors Rajkumar Buyya, Jemal Abawajy, Ajith Abraham, and Mukesh Singhal since 2011. His research interests are mainly in the areas of security and privacy. In these fields, he has published more than 90 papers in the topmost international peer-reviewed journals and conferences, including IEEE TCC, IEEE TNSM, IEEE TSUSC, IEEE TGCN, IEEE ICC, IEEE GLOBECOM, IEEE ISCC, IEEE SMC, IEEE PIMRC, and IEEE Network. He is an associate editor for Springer—Cluster Computing and KSII—Transactions on Internet and Information Systems and International Journal of Computers and Applications (IJCA), and he served as a program committee member of several conferences, including IEEE ICCE, IEEE UCC, IEEE SC2, and IEEE SMC. He was the general chair for INCoS in 2018.

received a PhD in computer science in 2006 from the computer science department at Saint Petersburg State University (specialization in artificial intelligence) and joined as lecturer (assistant professor) in the computer science department, Faculty of Science, Helwan University, on June 25, 2006. He is a member of such notable computing associations as the IEEE, ACM, EMS (Egyptian Mathematical Society), QAAP (Quality Assurance and Accreditation Project, Egyptian Supreme Council), Quality Assurance and Accreditation Authority (Egypt), and the board of the Russian-Egyptian Association for graduates. Dr. Darwish is the author of many scientific publications, including papers, abstracts, and book chapters concerning computational intelligence. He keeps in touch with his mathematical background through his research. His consulting, research, and teaching mainly focuses on artificial intelligence, information security, data and web mining, intelligent computing, image processing (in particular image retrieval, medical imaging), modeling and simulation, intelligent environments, and body sensor networking. This has resulted in his articles appearing in journals by such publishers as IEEE and Springer, including IJCSN and Advances in Computer Science and Engineering. Dr. Darwish is one of the founders of Cyber Security Research Lab (CSRL), organized by Professor Aboul Ella Hassanein, Faculty of Computers and Information, Cairo University, Egypt, and he is a member of research projects in Egypt in the areas of bio-inspired HCV analysis, breast cancer, and e-learning. Dr. Darwish has been solicited as a reviewer and a speaker, organizer, and session chair for many international journals and conferences. He has worked in a wide variety of academic organizations and supervises many master and PhD theses in different areas of computer science. Dr. Darwish practices four languages on a daily basis.

has received a High Study Degree and a PhD, both in the field of modeling and performance evaluation of computer communication networks, from the University of Mohammed V, Agdal, Faculty of Sciences, Rabat, Morocco. Since September 1995, he has been working as a professor in the Department of Mathematics and Computer Science at the Faculty of Sciences and Techniques, Settat, Morocco. He is the director of the Computer, Networks, Mobility and Modeling Laboratory. He is also the general secretary of the electronic Next Generation Networks (e-NGN) Research Group, Moroccan section. He is an IEEE senior member and an IEEE Communications Society member. He was a co-director of a NATO multi-year project entitled "Cyber Security Analysis and Assurance Using Cloud-Based Security Measurement System," having the code SPS984425. Dr. Abdelkrim Haqiq’s interests are in the areas of modeling and performance evaluation of communication networks, mobile communications networks, cloud computing and security, queueing theory and game theory. He is the author and co-author of more than 150 papers for international journals and for conferences and workshops. He is an associate editor of International Journal of Computer International Systems and Industrial Management Applications (IJCISM) and an editorial board member of the International Journal of Intelligent Engineering Informatics (IJIEI). He was also a guest editor of a special issue on next-generation networks and services of the International Journal of Mobile Computing and Multimedia Communications (IJMCMC), July–September 2012, Vol. 4, No. 3, and a special issue of the Journal of Mobile Multimedia (JMM), Vol. 9, No.3(4), 2014.