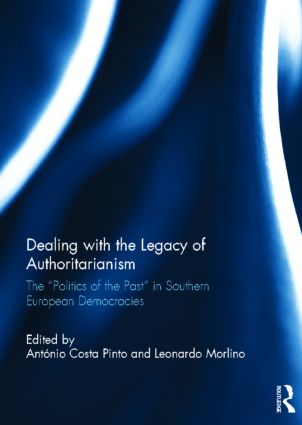 Dealing with the Legacy of Authoritarianism

The “Politics of the Past” in Southern European Democracies, 1st Edition

In recent years the agenda of how to ‘deal with the past’ has become a central dimension of the quality of contemporary democracies. Many years after the process of authoritarian breakdown, consolidated democracies revisit the past either symbolically or to punish the elites associated with the previous authoritarian regimes. New factors, like international environment, conditionality, party cleavages, memory cycles and commemorations or politics of apologies, do sometimes bring the past back into the political arena.

This book addresses such themes by dealing with two dimensions of authoritarian legacies in Southern European democracies: repressive institutions and human rights abuses. The thrust of this book is that we should view transitional justice as part of a broader ‘politics of the past’: an ongoing process in which elites and society under democratic rule revise the meaning of the past in terms of what they hope to achieve in the present.

'This is an especially valuable contribution to our thinking on how elites and institutions reflect, reconstruct and reconcile authoritarian pasts in new democracies. From its introduction to its conclusion, the collection teaches us important lessons that extend beyond southern Europe and even beyond comparative politics.'

António Costa Pinto is a professor of politics and contemporary European history at the Institute of Social Sciences, University of Lisbon. He is presently the President of the Portuguese Political Science Association. He has published extensively on fascism, authoritarianism, democratisation and transitional justice in Southern Europe.

Leonardo Morlino is professor of Political Science at Istituto Italiano di Scienze Umane (Florence, Italy) and President of the International Political Science Association in 2009-12. His main contributions are on change of regimes, consolidation of democracy, qualities of democracies with a special attention to southern and eastern Europe and Latin America.

The parallel regime transitions of the 1970s, when Southern Europe was the vanguard of the ‘third wave’ of democratisation, the impact of EU membership and Europeanisation and more recently, the region’s central role in the eurozone crisis have all made Southern Europe a distinctive area of interest for social science scholars. The South European Society and Politics book series promotes new empirical research into the domestic politics and society of South European states. The series, open to a broad range of social science approaches, offers comparative thematic volumes covering the region as a whole and on occasion, innovative single-country studies. Its geographical scope includes both ‘old’ and ‘new’ Southern Europe, defined as Italy, Greece, Portugal, Spain, Cyprus, Malta and Turkey.