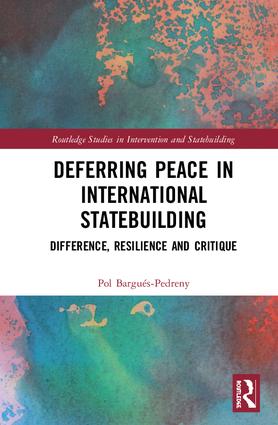 Since current peacebuilding interventions are abandoning domineering, top-down and linear methodologies, and experimenting with context-sensitive, self-reflexive and locally driven strategies, the book makes two suggestions. The first is that international policymakers are embracing some of the critiques of liberal peace. For more than a decade, scholarly critiques have pointed out the need to focus on everyday dynamics and local initiatives and resistances to liberal peace in order to enable hybrid and long-term practice-based strategies of peacebuilding. Now, the distance between the policy discourse and critical frameworks has narrowed. The second suggestion is that in stepping away from liberal peace, a transvaluation of peacebuilding values is occurring. Critiques are beginning to accept and valorise that international interventions will continuously fail to produce sensitive results. The earlier frustrations with unexpected setbacks, errors or contingencies are ebbing away. Instead, critiques normalise the failure to promote stability and peace.

This book will be of much interest to students of peacebuilding, international intervention, conflict resolution, international organisations and security studies in general.

'This important book illuminates the spectre haunting projects of international peace and state-building: bad faith. The ease with which the critical Western gaze dismisses both domestic capacities for self-government and external projects of transformation is both closely examined and profoundly challenged. A must read for policy practitioners, academics and activists worried about the current stasis in international policy-making.'-- David Chandler, University of Westminster, UK

'This highly readable account of the evolution of understandings of peacebuilding is perhaps the first systematic attempt to focus on how universal liberalism is being questioned. Starting with developments in the 1990s and moving forward to arguments about the local, hybridity and resilience, the book skilfully charts the shifts in international discourse. Employing a philosophical critique, this is a much needed critical engagement with contemporary thinking.'--Jonathan Joseph, University of Sheffield, UK

'Pol Bargués Pedreny's forthcoming Deferring Peace in International Statebuilding offers a rigorous analysis of the rise and fall of liberal peace models since the 1990s, and international interventions seeking to re-engineer war-affected societies and establish peace. His insightful study of the evolving interventions in Bosnia and Kosovo, where considerable resources have been expended, illustrates the failures of international models and how policy-makers have adapted to their failures. The policy adaptations have retreated from liberal beliefs in democracy and self-government to non-liberal governance. Leading critiques of liberal peace models have been absorbed in ways suggesting the incapacity of both international actors and the war-affected societies to transform the situation. Policy ideas of local ownership and resilience do not mean the revival of self-determination, but the risk management of insecure, divided communities. Furthermore the non-liberal governance examined by Pol Bargués Pedreny now informs international policy-makers' understanding of how to govern their own societies. Consequently to understand the future direction of European governance you should look to the hybrid governance pioneered in Bosnia and Kosovo. I highly recommend Pol Bargués Pedreny's study.' -- Vanessa Pupavac, Universtiy of Nottingham, UK

'In this strikingly reflective and thoughtful work, Bargués-Pedreny hits on the idea of 'vorarephilic phantasies' as a description of the generalised deconstructive tendencies that abound in contemporary peace-building theory (as, we might say, in contemporary Anglophone theory in general). Bargués-Pedreny here captures perfectly the deconstruction that ends up deconstructing itself, finding a heightened pleasure in this process of being gobbled up entirely. Bargués-Pedreny shows that it is in this context that injunctions to still more pluralism in our studies of peace-building, to still more attention to difference, needs to be understood. Thus, critics of liberal peace-building are giving up their own will to know and, in their invocations of the other that resists all analysis, still yearn for that altogether Other which could only be God. For his part, Bargués-Pedreny does not abandon hope that we might further our understanding of the world, even when that world is at its most complicated. This call for confidence in what, together, we can do occupies that ground between hubris and self-loathing that used to be called politics. In calling us back to a politics of peace-building, Bargués-Pedreny's book is both compelling and convincing.' --Gideon Baker, Griffith University, Australia

'With very beautiful and clear writing, Bargués-Pedreny has constructed a highly entertaining book that reviews the trajectory of international peacebuilding ‘from the early days of euphoria and trust in democracy and liberal peace in the early 1990s, through the super interventionist measures of the 2000s to today’s therapeutic approaches that emphasise local ownership and resilience' - Itziar Mujika Chao, Journal of Intervention and Statebuilding

2) The Disillusionment with Democratisation

3) The Shifting Governance of Post-Conflict Kosovo

Part 2: From Agony to Love: Vorarephilia at the End of Liberal Peace

7) Conclusion: Uncanny Optimism at the End of the Liberal Peace