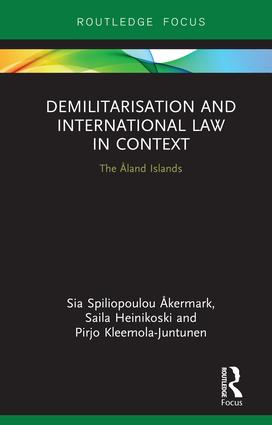 Demilitarization and International Law in Context

The demilitarisation and neutralisation of the Åland Islands is a confirmation of, and an exception to, the collective security system in present-day international affairs. Its core idea is that there is no need for military presence in the territory of the islands and that they are to be kept out of military activities. A restricted use of military force has a confidence building effect in cases where competing interests may be so intense that banning the very presence of military force remains the only viable option. The regime of the Åland Islands is the result of pragmatic and contingent political compromises. As such, the case of the Åland Islands offers an alternative trajectory to the increased militarisation we witness around the world today.

Through parliamentary and archival materials, international treaties and academic works, the authors examine the legal rules and institutional structures of the demilitarisation regime. In this process they reassess core concepts of international law and international affairs, such as sovereignty and security, and introduce a theoretical view on the empirical case study of the Åland Islands. The book covers legal, political and policy discursive aspects of demilitarisation, international co-operation, defence and security matters around the Baltic Sea with a broader European and global relevance. It can be a source of inspiration for all those in search of constructive efforts that can address territorial disputes and security challenges.

1 Introduction: The Goal and Structure of the Book

1.2 The Concept of Demilitarisation

1.3 The Birth and Impact of ‘Comprehensive Security’

1.4 From the Cold War to a Multipolar World?

1.6 Geopolitics and Securitisation as Potential Justifications for Militarisation

2.1 An Overview of the International Agreements Establishing the Demilitarisation and Neutralisation of the Åland Islands

2.2 The 1921 Convention on the Non-Fortification and the Neutralisation of the Åland Islands

2.3 The Åland Islands and Finland After the Second World War

2.5 Remarks on the Legal Validity of the Norms

3 The Law of the Sea and the Demilitarisation of Åland

3.3 Navigational Rights in the Territorial Waters of the Åland Islands

4.2 Integration in the Baltic Sea Region and the Åland Islands

4.3 Bilateral and Nordic Co-operation: The Example of SUCBAS

4.5 The Åland Islands in Regional Security Co-operation as Understood in Finland

4.6 Demilitarisation Between Regionalism and Multilateralism

5.2 The Concept of Sovereignty Reshaped

5.3 The Åland Islands Regime as Part of Contemporary Collective Security

5.4 Afterword: Does the Demilitarisation Add Anything to the Quest for Peace in the Baltic Sea?

, LL.D., LL.Lic., LL.M., Postdoctoral Researcher, Northern Institute for Minority and Environmental Law/Artic Centre, University of Lapland. Her work focuses on international law in particular the law of the sea and international environmental law.