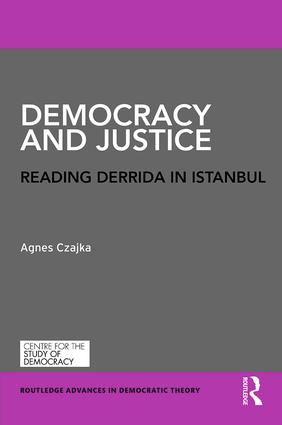 This book explores the possibilities offered by Derrida’s work on democracy for interpreting contemporary struggles over democracy in Turkey.

The relationship between democracy and justice seems of unquestionable importance to Derrida, with democracy and justice held in tension by deconstruction. Agnes Czajka offers a qualified endorsement of a ‘just democracy’, grounded in the possibilities opened up by reading Derrida’s work on democracy together with his work on justice. She posits that one way of imagining democracy-to-come might be to imagine it as a ‘just democracy’, or one poised at the intersection of the aporia of democracy and the (non)imperative to justice. In the particular context of contemporary struggles over democracy in Turkey, she also explores what such comportment toward a just democracy (or a justice of/in democracy) might look like in the context of that ‘particular’ democracy.

Chapter One: No Democracy without Deconstruction

Chapter Two: The Autoimmunity of Democracy

Conclusion: The Inheritance of Democracy

Agnes Czajka is a lecturer in the Department of Politics & International Studies at the Open University. Her research interests include contemporary social and political thought, democracy, citizenship, contentious politics, European and Mediterranean politics, and refugee and migrant politics.

Democracy is being re-thought almost everywhere today: with the widespread questioning of the rationalist assumptions of classical liberalism, and the implications this has for representational competition; with the Arab Spring, destabilizing many assumptions about the geographic spread of democracy; with the deficits of democracy apparent in the Euro-zone crisis, especially as it affects the management of budget deficits; with democracy increasingly understand as a process of social empowerment and equalization, blurring the lines of division between formal and informal spheres; and with growing demands for democracy to be reformulated to include the needs of those currently marginalized or even to include the representation of non-human forms of life with whom we share our planet.

publishes state of the art theoretical reflection on the problems and prospects of democratic theory when many of the traditional categories and concepts are being reworked and rethought in our globalized and complex times.

The series is published in cooperation with the Centre for the Study of Democracy, University of Westminster, London, UK.