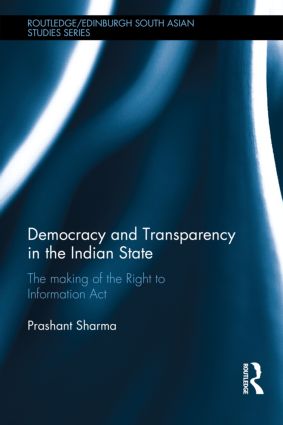 Democracy and Transparency in the Indian State

The Making of the Right to Information Act, 1st Edition

The enactment of the national Right to Information (RTI) Act in 2005 has been produced, consumed, and celebrated as an important event of democratic deepening in India both in terms of the process that led to its enactment (arising from a grassroots movement) and its outcome (fundamentally altering the citizen--state relationship). This book proposes that the explanatory factors underlying this event may be more complex than imagined thus far.

The book discusses how the leadership of the grassroots movement was embedded within the ruling elite and possessed the necessary resources as well as unparalleled access to spaces of power for the movement to be successful. It shows how the democratisation of the higher bureaucracy along with the launch of the economic liberalisation project meant that the urban, educated, high-caste, upper-middle class elite that provided critical support to the demand for an RTI Act was no longer vested in the state and had moved to the private sector. Mirroring this shift, the framing of the RTI Act during the 1990s saw its ambit reduced to the government, even as there was a concomitant push to privatise public goods and services. It goes on to investigate the Indian RTI Act within the global explosion of freedom of information laws over the last two decades, and shows how international pressures had a direct and causal impact both on its content and the timing of its enactment.

Taking the production of the RTI Act as a lens, the book argues that while there is much to celebrate in the consolidation of procedural democracy in India over the last six decades, existing social and political structures may limit the extent and forms of democratic deepening occurring in the near future. It will be of interest to those working in the fields of South Asian Law, Asian Politics, and Civil Society.

Sharma provides valuable insights and provocations, not only on the RTI in India but also on the notion of access to information more broadly. […] This book will be of significance to people interested in ex ante policymaking processes, in South Asian law and politics, and in social movements and civil society.

Prashant Sharma‘s book provides the reader with a fresh perspective on the emergence of the RTI Act and on the different actors and locations involved in the process of drafting and enactment. […] Overall, Sharma sets out the argument of the book very clearly. There is a lot of detail, particularly in the chapters on the role of the state and the international context, which adds to our understanding of the emergence of the RTI in India. [The book] contributes to an ongoing debate, particularly in light of the implications of its critique of the potential of grassroots movement politics […].

Prologue 1. Democratic Deepening and the Right to Information 2. The Dominant Narrative 3.Digging Up the Grassroots 4.Opening Up the Government 5.The Foreign Hand 6.How Deep is My Democracy?

Prashant Sharma is a Global Fellow at the Open Society Foundations, New York and is currently conducting research on the accountability of public--private partnerships. He is also a Visiting Fellow at the United Nations Research Institute for Social Development (UNRISD), Geneva and is associated with the Swiss Graduate School of Public Administration (IDHEAP), University of Lausanne. He did his PhD at the London School of Economics and Political Science and has also studied at the School of Oriental and African Studies (SOAS), University of London; Jamia Millia Islamia University, New Delhi; and the University of Delhi.

This series is published in association with the Centre for South Asian Studies, Edinburgh University - one of the leading centres for South Asian Studies in the UK with a strong interdisciplinary focus. It presents research monographs and high-quality edited volumes as well as textbook on topics concerning the Indian subcontinent from the modern period to contemporary times. It aims to advance understanding of the key issues in the study of South Asia, and contributions include works by experts in the social sciences and the humanities. In accordance with the academic traditions of Edinburgh, we particularly welcome submissions which emphasise the social in South Asian history, politics, sociology and anthropology, based upon thick description of empirical reality, generalised to provide original and broadly applicable conclusions.

The series welcomes new submissions from young researchers as well as established scholars working on South Asia, from any disciplinary perspective.